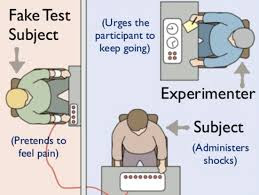 Before taking to the streets with hidden video cameras and pranking the public (or testing, depending on your flavor) was in vogue, experiments were usually conducted by men in long, white lab coats. One especially infamous social experiment, done to explain how so many people could have condoned the Holocaust, let alone gotten on board with it, was conducted by Stanley Milgram. The Yale University professor formed his The Obedience to Authority (later dubbed the Milgram experiment), with two participants (over time, applicants ranged from Yale University students to anyone who responded to a 'looking for applicants' ad in the local paper).

The purpose of the Milgram experiment was to measure the willingness of study participants, men from a diverse range of occupations with varying levels of education, to obey an authority figure who would instruct them to perform acts conflicting with their personal conscience. Participants were led to believe that they were assisting an unrelated experiment, in which they had to administer electric shocks to a "learner." These fake electric shocks gradually increased to levels that would have been fatal had they been real (Wikipedia).

Most people, Milgram afterward claimed, will willingly accept instruction from a higher authority without questioning it, especially if it means that the burden of responsibility will have been lifted from their own, fragile shoulders. Eventually, when people realized that the Milgram experiment was really about how far a person can be pushed to hurt others, it was banned from the east coast. Still, the results of Milgram's experiment was heavily debated in the fifties, and in varying degrees, is still a pretty hot topic today.

Social experimenting has come a long since then.

When it became popularized by the layman, the question burning a hole in people's minds, "How far will a person go with regard to bending the rules (be they governmental, societal, social or religious) if s/he thinks s/he can get away with it?" has been tested in a variety of ways over the years, some with pretty shocking results. Others, thank G-d, have been far more heartwarming.

For instance, a social experiment was staged to see whether people would take advantage of a blind man - and overall the results were rather disappointing.
YouTube personality Adrian Gee, of Adelaide, Australia, took to the streets with a pair of dark glasses and a long cane while posing as a blind man.
He approached a number of unsuspecting people and asked them for change from a five dollar note before handing them ten times that.
Afterward, I saw a similar video filmed by a Jewish man in a city somewhere in Israel. It was really heartwarming to see EVERY single person help the man pretending to be a helpless blind man. When push comes to shove, I thought, people can look out for each other. I walked away from that video clip smiling.

However, the results of that first experiment, conducted in Australia, made me see black. "What is with people?" I thought, "and how could one raise the yardstick of societal conscience in the world? Where does one even begin?"
The answer came to me in a book called The Color of Heaven by Rabbi Yaakov Asher Sinclair. He addresses the million dollar question of "What would I do if I knew I wouldn't get caught?" with a verse from Deuteronomy "And you will return to Hashem, your G-d, and listen to His voice..." (Deuteronomy 30:2). When we are aware that G-d is aware and we conduct ourselves accordingly, we won't need to look over our shoulders while breaking the rules because the all seeing eye will hopefully obliterate all vestiges of derelict behavior. And after I share Rabbi Asher's story, with the help of G-d, your urge to break the rules will become a little less compelling, as well.

A couple of months ago, my daughter lost a wallet containing a large sum of money. She realized the wallet was gone when she tried to pay the taxi that brought her home. My wife went back with her and retraced her steps, but to no avail. The wallet was gone. We called around to all the shops she had gone to. Nothing. After a couple of days, we thought we'd seen the last of the wallet.

About a month later, a man telephoned the house and spoke to my wife. He said he had seen the wallet in the street and picked it up. He was a poor person struggling to keep his head above an ever-rising tide of  bills and debts. The sight of such a large amount of money overwhelmed him. His son's cheder (elementary school) had told him that unless he paid the previous term's tuition, he [the son] would not be able to return at the end of the summer. He looked down at the full wallet, and the temptation was too much for him. He took half the money and paid his son's tuition.

Two day before Tisha b'Av (a fast day for commemorating the destruction of the First and Second Temples as well as the various catastrophes that have befallen the Jewish nation over the centuries), he called our home, "How can I fast on Tisha b'Av with this on my mind?" he asked.

He promised to pay us back as soon as possible... My wife told him, "Don't worry! Pay us back when you can." She suggested he leave the wallet in a nearby store to avoid embarrassment.

Apart from my wife's response, this episode warmed my heart. Many people might have overcome the temptation to steal and returned the wallet intact together with a nice self-applied pat-on-the-back. But once the desire to steal overcomes a person, it's much more difficult to do the right thing. At that point, a person can lapse into despair and think, 'Well that's it. I took it. Finished. I stole it.' What impressed me was the man's ability to climb out of the pit after the fall (The Color of Heaven - Nitzavim).

The purpose of Yom Kippur, The Day of Atonement, is growing in the recognition that coming out of the woods, exiting obscurity or pulling oneself, elbow over fist, out of a darkened pit is possible.

While it cannot be contested that the process is difficult and different for everyone, one idea can find solidification in the collective mindset of humanity. Grow in awareness that He (G-d) is aware. Over time, exercising such a muscle will help us alter our thoughts, speech and actions for the better.

Have an easy and meaningful fast.

Email ThisBlogThis!Share to TwitterShare to FacebookShare to Pinterest
Labels: conscience, get away with it, Milgram, social experiment, Yale, yom kippur