Growing up, people always told me that the use of anthropomorphic terms for Hashem (G-d) in the Torah, "I will stretch forth My hand and smite the Egyptians..," (Exodus 3:20), "The L-rd descended upon Mt. Sinai, to the peak of the mountain, and the L-rd summoned Moshe to the peak of the mountain, and Moshe ascended" (Exodus 19:20), "And it will be, if you listen to the voice of Hashem i.e. if you obey Him..," (Deuteronomy 28:1), are there as means to help humanity relate to Him. Since we are finite, and G-d is infinite, referring to Him in human terms are the only way we could have an inkling as to Who G-d is.

And anyway, the only reason we know what we know is because He told us.

Recently, a friend of mine gave me an entirely new perspective on this idea. 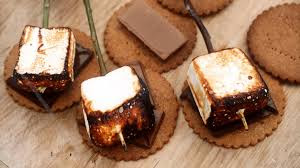 Did you ever have someone innocently drop an information bomb in the midst of casual conversation? It was like that.

My friend mentioned, oh so casually, while we were discussing something truly banal -- the best way to roast marshmallows (over a bonfire or by the gas range at home; the argument was ease versus taste) -- that at the end of the day, things like that didn't matter since we weren't real. "Don't get me wrong," she added. "I love roasted marshmallows but there's no point in getting caught up with petty details if we don't actually exist."

Come again? Where on earth did that come from?

Taken aback at the sudden turn of conversation, I didn't immediately respond.

"The Torah describes G-d in human terms, right?" she tried to explain. "Various places in the Torah describes G-d as having a hand, a voice etc. We think that they're there as something for humans to hook into since the question of who and what G-d is is impossible to grasp on its own. Really, the opposite is true. G-d has all those things that humans have AND, to give us something to hook into, He created us with those things so that we could relate to Him through them. G-d has hands so we have hands. G-d has a voice so we have voices.  G-d uses His hands to do kindness to His creations; so too, we emulate Him by using our hands to do kind acts for one another. G-d uses His voice to teach His ways and His Torah -- we are meant to do the same.

"In the same vein, the relationships that all of us share, whether it be with our parents, spouses or friends, were all created so that we could relate to G-d on those terms because He encompasses all of them.

"But," my friend finished, "even with all that, G-d is impossible to grasp. He is infinite and we, with our limited understanding, cannot fathom what that means.

We, our lives, are a parable. G-d is the real thing. And that's why, at the end of the day, it doesn't matter where we eat the marshmallows or how they taste off a stick or fork. It just doesn't matter." And with that, my friend got up and left the room.

What did this topic have to do with marshmallows? Nothing, nothing at all. It was a non sequitur, I decided.

Either that or she changed the subject because I was winning the marshmallow debate.

In any case, I decided to let it and the existential angst of "What is this life all about?" and "What's my significance in the cosmic plan of the universe?" go as I I hunkered down for the next few weeks to mull over the idea.

And if you don't get it, don't worry. I still don't get it. I'm not sure we're supposed to.

However, the reason I brought it up is because the above idea helped me find the following concept extremely compelling.

In a lecture on the months of Elul and Tishrei i.e. preparation for the High Holy Days of Rosh Hashana (The Jewish New Year) and Yom Kippur (The Day of Atonement) as well as the High Holy Days themselves, Rabbi YY Jacobson draws a parallel between the Jewish nation's relationship with G-d  and the blossoming of a relationship between a man and his soon to be betrothed.

The month of Elul is the month of courtship. It's when G-d is referred to as the king in the field. Somehow, he is extra close in the hopes of getting to know us better.

Erev Rosh Hashana, the night of Rosh Hashana, G-d proposes. How? The Gemara it tells us that G-d asks the Jews to, "Make me a king and I will rule over you."

After listening to my friend's piece and after coming to terms with the puniness of humanity, the weakness of our ability to grasp concepts that are beyond the scope of our understanding, I hear that the King of the Universe is condescending to ask us?! Asking us like we have some sort of a say in the matter? Asking us as if our answer will make any difference?

I was further astonished when Rabbi YY added that the Jewish nation's response was, "G-d, I need to think about Your proposal. I'm not sure I'm ready to marry you. I'm not even sure I want to. I need time."

This is where the idea of free will steps in. We have to choose to be G-d's nation. He can't force us to listen to Him; it would totally negate the idea of picking right. And so, the first night of Rosh Hashana (it's a two day holiday) has a certain frailty to it. The universe is hanging in the balance; it has a question mark on it -- will they or won't they? Everything depends on this relationship.

And so, the universe waits with bated breath for the Jews to come back with an answer.

The next day, the Jewish people acquiesce by blowing the shofar.

What's shofar got to do with it?

The three types of sounds that the shofar emits represent the different stages of a relationship. The tekiyah, as the first sound. is one long blast that connotes clarity, understanding and joy. The second, the shevarim, represents moments of brokenness, moaning and pain. The third, teruah, has the sound of hiccups and sobbing. It expresses a deep and powerful sadness. The second and third shofar blasts are followed by another tekiyah, a longer one, which is a declaration that a relationship is made stronger with experiencing the second and third stages of challenges together.

Next, Yom Kippur, The Day of Atonement, is called the wedding ceremony since it parallels the day the Jewish nation accepted the second set of Luchot Habrit (the stone tablets bearing the Ten Commandments). We have a custom to come to services in white as a nod to brides everywhere. And the reason Yom Kippur is considered the Shabbos of Shabboses as well as the holiest day of the year is because it is when G-d forgives our previous infidelity with the giving of the first set of luchot and gives us a chance to turn a new leaf.

With all this in mind, I hope you have a wonderful Yom Kippur. May you be blessed with a year of joy and fulfillment.