When I walked out of my first day of teaching, my head was whirling. This wasn't because I had been teaching classes back to back or because I hadn't managed to down one cup of water the entire day. It was because one of my students wouldn't keep her mouth shut in class. "I can't compete with them," I grumbled to a friend later that day. "This girl talks so much, she interrupts herself." 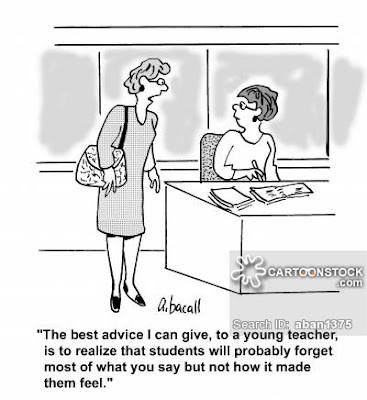 My friend told me to lighten up and write a book.

Tell that to every teacher, I wanted to shoot back. But I knew I'd be wasting my breath; only other teachers understand the battlefield of classroom management.

Everyone else nods, laughs if the story's humorous and changes the subject.

For some reason, around this time, I started feeling a budding respect for my mother's struggles as a parent.

In retrospect, I couldn't wholeheartedly blame her for not being a perfect smiley person all the time. If it's hard being a teacher/ actor/ policeman and makeshift mother in varying degrees during a forty-five minute class period, I shudder at what it must have been like on the job trajectory of a seven day week cycle, and no paid vacation in sight (not any that I knew of anyway).

But I needed more than common ground with my mother's experiences to help me get along with my student. I didn't want to be reduced to a howling mess within a matter of days; I needed a game plan.

Desperation, or rather, necessity, that mother of invention, helped me come up with something. While brainstorming on my way to work, coffee in fist, the next day, I decided to give my student the ratio test. "I give you a demerit point for every moment you speak without raising your hand," I told this girl. "and I'll give you one point for every sentence you write instead of speaking. If, by the end of class, you end up with more points than me, then I'll give you a point for the day. When you reach ten, we'll go out for ice coffee." My student immediately nodded her head vigorously at the idea. Boom, yeah. No one would ever turn down the prospect of a free class period, especially if it was as a result of something s/he earned.

I loved this idea because it also solved the issue of my having to rebuke students for interrupting me during class. I could just make a face while I was dotting the paper and they'd immediately pipe down.

The idea worked for about a day. Then, the novelty of my plan wore off. That's what my inner cynic said, anyway.

This student interrupted me so many times, that her demerit  points, like Walt Whitman's poetry, ran right off the page. I was so frazzled by the end of a double class period that when she asked to read her notes out loud, I informed her that if she got more than fifteen demerit points, then she was automatically disqualified and would not be receiving any point for the day. "But you didn't say that when you started this," she cried, scrunching up the notes and tossing them in the trash.

"Are you on Ritalin?" I asked. Not the most sympathetic response, I grant, but frustrated teachers aren't angels.

"No," she said and stormed out.

I returned home later, head cluttered and soul weary. Where did I go wrong? I wondered. My idea was such a good one. Why didn't it go off without a hitch?

Because, a voice in my head whispered, that's not how proper chinuch works. You can't coerce another human being, be it student or child, into doing your will if you want long term results. Chinuch is a process that requires planting as well as building.

Planting i.e. implementing long term healthy behavior patterns in another person doesn't just require setting the groundwork for a child to grow a certain way. A teacher or parent has to do more than make suggestions on what living a meaningful, balanced, healthy life entails while also giving that child exposure to examples of the above. S/he must also give that child a wide berth within which s/he can grow. This requires trust.

And patience. Lots and lots of patience.

Building i.e. making rules and setting boundaries is also necessary in the chinuch process because it ensures that a child, like a vine on a trellis, will grow healthy, neat and strong without turning into a wild, tangled mess of greenery, invading every inch of space, outside of the direction in which it was intended to grow.

When I came up with this "game" for my student, I was building boundaries into my classroom setting. Then, when I explained that game's purpose was to help my student acquire self restraint, and the value of such a quality, I figured I'd covered all my bases. I didn't take into account that it would take time for the concept to sink in, for the seeds to rot before they sprouted into something green and strong, so to speak.

It looked like I'd need to do some inner pruning as well.

Doesn't someone somewhere say that students are our best teachers? I really believe that.