Jewish mourning comes to help a person gradually decrease the intense sadness which he feels at the departure of a beloved. According to Jewish law, the laws of mourning only apply to seven first-degree relatives of the deceased: son or daughter, brother or sister, father or mother, and spouse (husband or wife). 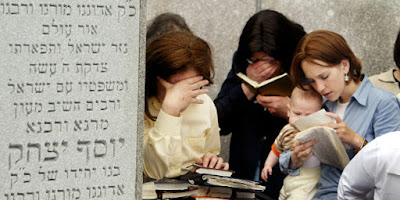 There are five stages to the mourning process:
1) Aninut, pre-burial mourning.
2) & 3) Shivah, a seven day period following the burial; within the Shivah, the first three days are characterized by a more intense degree of mourning.
4) Shloshim, the 30-day mourning period.
5) The First Year (observed only by the children of the deceased).

When the fifth stage of mourning is over, a person is expected to let go of his grief and move on with life -- whether or not s/he feels ready. This is so that the prescription offered by the Torah for mourning can be prescriptive as oppose to destructive. Death is part and parcel with the cycle of life and we need to accept and thrive with it, not get marred down in despondency.

Interestingly enough, while the mourning process of personal loss is a gradual moving away from the meis (deceased), the grieving process that we go through during the three weeks -- the twenty-one days which mark the loss of the Bait Hamikdash (our Holy Temple) as well as a remembrance and sorrow the number of historical calamities that overcame our nation -- intensifies as we get closer to the blackest day of the year. 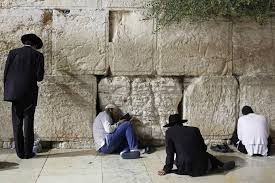 Personal loss, the departure of one who was closest to us, in blood if not in spirit, is like having a piece of our hearts carved out. The experience is excruciating, mind numbing.

Since the measure of loss one feels over his loved one's departure is generally in alignment with the measure of love s/he has felt for that person, anyone who has gone through the loss of a loved one can identify with one who is currently experiencing it. But what about a child whose father or mother passed away before s/he could experience a relationship with them? How could this child truly comprehend the pain of loss, his or otherwise, if s/he has never experienced it?

That is the pain of our, the Jewish nation's, mourning for the Holy Temple and the presence of G-d in Jerusalem. Many of us mourn because we aren't aware of, we cannot fathom, the loss because we have never experienced the relationship.

When the war of 1967 ended, legend has it that the Western Wall was soaked in the tears of Jews who longed to daven (pray) at the remnant of the place where the Holy Temple once stood. When they finally did get a chance to stand near the holiest place on earth, how could they hold their sobs back? Two secular Israeli soldiers took in this scene, somewhat bemused. Suddenly, one of them burst into tears. "Why are you crying," his friend asked, surprised. "I'm crying," the other man said, "because I don't know why I should be crying."

May we merit to see the rebuilding of the Beis Hamikdash speedily, in our days.

For further details on the laws of mourning for personal loss as well as the laws which cause one to mimic the laws of personal mourning during the three weeks - culminating with the Fast of the Ninth (Tisha b'Av) - read on.

Note the inversion between the laws of mourning and the mourning process we are meant to experience during the Three Weeks. One is a gradual moving away; the other, is a slow approach as well as an intensifying of the experience of loss.


The first stage is called aninut (the time between the death and burial)
This is a time of numbing, paralyzing grief. As a result, the most religious obligations are cancelled since it is when a person's despair is at its height and his mind is most troubled. During this period, the griever's all-consuming concern is funeral and burial arrangements, to the extent that he is absolved by Torah law from the observance of all mitzvot requiring action (like praying, putting on tefillin, etc.). It is during this period that the k'riah, or rending of the garments, as a sign of grief, is performed.

Note to friends and family: don't try to comfort the mourner until the meis is buried. It is a time of silence, not words.

The second and third stages are called shiva (the seven day period following the burial.
The first three days of shiva are when a person is in state of intense grief - there is a lot of crying and lamenting. Therefore, visitors are somewhat discouraged. However, the last four days are ones where friends, relatives and community members are encouraged to visit the house of the mourner, to focus exclusively on the memory of the deceased with him and to offer him comfort over his loss. While s/he is still in a state of mourning, s/he continues to wear his torn garment and house slippers. S/he refrains from showering and grooming himself, sits on a low stool, and must recite kaddish every day. It is also a time when the mourner is prohibited to do work.

It is at this phase that his inner world slowly begins to expand again as s/he takes in the faces of those who came to comfort him. This is when the inner freeze caused by death begins to thaw.

The mourner's house reflects the grieving s/he is going through - people generally light a seven day candle, cover the mirrors, and refrain from wearing leather shoes and freshly laundered clothes, or any new clothes for that matter, they do not have marital relations, do not listen to music and refrain from all forms of entertainment. They also do not learn Torah since this is considered the greatest source of  delight that a person can experience.

The fourth and fifth stages are called the Shloshim and The First Year (the thirty day mark and the first twelve months following the burial).
Even as the mourner resumes his or her everyday routine after the Shivah, certain mourning practices, such as not purchasing or wearing new clothes, cutting one's hair, enjoying music or other forms of entertainment, and participating in joyous events (weddings, etc.), are continued for a period of thirty days. After thirty days, the mourner refrains from joyous events, various forms of entertainment and music for a full year. For individualized questions, ask your local Orthodox Rabbi.

The laws of mourning during the Three Weeks, Nine Days and Tisha b'Av
The "Three Weeks" between the 17th of Tammuz and the Tisha B'Av have historically been days of misfortune and calamity for the Jewish people. During this time, both the First and Second Temples were destroyed, among other terrible tragedies.
These days are referred to as the period "within the straits" (bein hametzarim), in accordance with the verse, "All her oppressors have overtaken her within the straits" (Lamentations 1:3). On Shabbat, during the Three Weeks, the Haftorahs are taken from chapters in Isaiah and Jeremiah dealing with the Temple's destruction and the exile of the Jewish people.
During this time, various aspects of mourning are observed by the entire nation. We minimize joy and celebration. And, since the attribute of Divine judgement (“din”) is acutely felt, we avoid potentially dangerous or risky endeavors.

Aspects of mourning during The Three Weeks
The Nine Days - an intensifying of mourning observances.
The period commencing with Rosh Chodesh Av is called the "Nine Days." During this time, a stricter level of mourning is observed, in accordance with the Talmudic dictum (Ta'anit 26), "When the month of Av begins, we reduce our joy."

1. We avoid purchasing any items that bring great joy.
2.  We suspend home improvements, or the planting of trees and flowers.
3.  We avoid litigation with non-Jews, since fortune is inauspicious at this time.
4.  We abstain from the consumption of meat (including poultry) and wine. These foods are symbolic of the Temple service, and are generally expressions of celebration and joy.
5.  We refrain from wearing newly laundered garments, or laundering any clothes.
6.  We do not bathe for pleasure.

What Happened on the Ninth of Av? Why is it a time of intense mourning?
On Tisha B'Av, five national calamities occurred:
Other grave misfortunes throughout Jewish history occurred on the Ninth of Av, including:
Aspects of mourning the afternoon before Tisha b'Av
During the afternoon prior to Tisha B'Av, it is customary to eat a full meal in preparation for the fast.
At the end of the afternoon, we eat the Seudah Hamaf-seket – a meal consisting only of bread, water, and a hard-boiled egg.
The egg has two symbols: The round shape reminds us of a sign of the cycle of life. Also, the egg is the only food which gets harder the more it is cooked – a symbol of the Jewish people's ability to withstand persecution. During the week of Shiva, the mourner traditionally eat these food items as well.
Food eaten at the Seudah Hamaf-seket, namely a boiled egg, is dipped in ashes, symbolic of mourning. The meal should preferably be eaten alone, while seated on the ground in mourner's fashion.
When the afternoon prior to Tisha B'Av occurs on Shabbat, there is no Seudah Hamaf-seket with eggs and ashes. Rather, the regular Shabbat "third meal" is eaten, albeit without guests and fanfare.
Restrictions on Tisha B'Av
Upon sundown, the laws of Tisha B'Av commence – consisting of the following expressions of mourning:
1. No eating or drinking until nightfall the following evening.
2. Other prohibitions include:
3. Other mourning practices include:
All information on the laws of mourning as well as the laws of observance for The Three eeks and Tisha b'Av were taken from the following two sites:
chabad.org
aish.com