Parshat Pinchas - The Sun and Moon 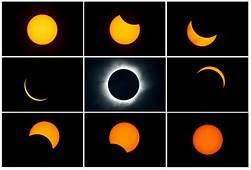 When my sister, Miri, mentioned that she'd be driving halfway across America to see the solar eclipse, my heart shriveled. "I wanna go," I cried; "fly me over there so I can come with you." Having moved to Israel eight years ago, my prospects weren't too bright. Still, I enjoyed hearing the smile in my older sister's voice as she shared details about her upcoming trip.

The last solar eclipse to hit American states was in June 1918 so, frankly, I could understand the hype that had people swept off their feet. In fact, as darkness fell, guys proposed to their significant others; a couple even planned for their wedding to coincide with the moon's covering the sun. Okay, so maybe the excitement was a tad excessive, but I could still understand humanity's wanting their most meaningful moments tinged by an early twilight, midnight ambiance. How often do we experience solar eclipses? Exactly.

Miri, specifically, had a vested interest in making her two day journey, a journey accompanied by a backseat full of five little energizer bunnies, mind you (ones who probably drove her slightly nuts). She feels connected to the moon. Not because she's part of an occult, G-d forbid. And I've never heard Miri breath a word about goddess worship, either. She's also not the type to paint her face and dance around a bonfire at two o'clock in the morning, so that's definitely out. However, she is into the whole masculine, feminine energy thing, and since the moon is representative of the feminine aspect, she jumped as the chance to see nature's woman eclipsing nature's man. If I had been there with her, I would've cheered for the overhaul of men everywhere, too.

Just... kidding. Men should not be overhauled.

But in all seriousness, what is this masculine, feminine thing all about? What does each aspect represent? And why are feminists (read: masculo feminists) so bent on proving that they're every bit as good as men if not better?

Without commenting on actual men and women (I leave that to you), I want to point out how Judaism views the masculine and feminine. The masculine is the provider, the instructor and the one who, like the sun, is a resource of light and life. On the flip side, the latter is the receiver, the one who, like the moon, reflects the sun's rays although she has no light of her own.

By the way, this is why the Torah often refers to G-d as a Him as oppose to a Her. As an aside, G-d cannot be gendered; He created the idea of there being genders to begin with. He is above and beyond all that - kind of like a novel's third person narrator retelling a story as a character removed from it. But if the thought of G-d's being more often referred to as a king and not a queen has kept you up at night, rest easy. G-d is called a father and king far more often than a mother and queen because He gave us the Torah (Torah literally means instruction in ancient Hebrew). We, as the Jewish nation, received it and therefore, are often referred to as the king's bride.


What masculo feminists do not understand is that male female roles aren't necessarily limited to men and women alone. They can also be defined by the teacher student paradigm, one which we see in this week's Parshat Pinchas. In this week's Parshah, a famous commentary, the Sefat Emet, compares Moshe, the ultimate teacher, to the sun and his main disciple, Yehoshua, to the moon. It starts like this: G-d tells Moshe to appoint Yehoshua as leader of the Jews after Moshe passes away, "You shall bestow some of your majesty on him so that the congregation of the children of Israel will take heed" (Number 27:20). Like the moon, Yehoshua had no light of his own to offer (Moshe was the sole receiver of that initial introduction to the Torah - he then taught it to the Jews), but as one who could reflect the light of Moshe's teachings, he was top notch.

After Yehoshua became leader, he continued teaching, of course, and led the Jewish nation into the land of Israel. Bringing the Jews to Israel was something Moshe could not do since Hashem forbid it (this idea deserves a class in and of itself). Although Yehoshua paled in comparison to Moshe, who was the greatest prophet that ever lived - who can beat the five books of Moses, after all - Yehoshua accomplished things that Moshe couldn't and he wrote a prophetic book as well, called Sefer Yehoshua (the book of Joshua).

Western society's history, dating all the way back to Greek times, shows a grave error in judgment when leaders and philosophers taught that women should be considered secondary to men. This is why Sylvia Plath's Esther Greenwood dreaded the idea of marriage, implying that it was a demoralizing, degrading experience, "What a man is is an arrow into the future and what a woman is is the place where the arrow shoots off from." Is marriage just an experience of men's having a lifetime to self discover while their wives are limited to their spouses' tempers and whims? As a follower of Judaism, I respectfully disagree with this miserable view.

That's not to say that society should demonize running a home and raising kids while simultaneously glorifying the workplace (and I am certainly not endorsing female Rabbis). However, if you take a look at the masculine feminine through the teacher student lens in everyday circumstances, you can see that everyone has a little of both the teacher and student within them. Moshe started out as a student and so did Yehoshua. At some point, we all start out as little silvery orbs who have the potential to eclipse suns.