Give Ten Percent of Your Earnings to Charity


The Torah writes that it's forbidden to test Hashem (G-d) (Ta'anit 9:1). Therefore, when the Jews tested G-d's patience during their forty year stint in the desert, they paid for it big time. When King David asked G-d to test him as a testament (no pun intended) to King David's love for Him, David, too, had a complete wipe out.

You get it. Testing the Creator of the universe is bad news. 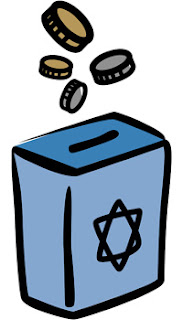 Yet, when it comes to matters of tzedakah, charity, Hashem says, "Try me." Our sages tells us עשר תעשר כדי שתתעשר - give ten percent of your earnings and you will be guaranteed dividends, every penny from which you donated your ten percent, in fact. The paradox, that giving away money will make you wealthier, exists to encourage people to open their hearts, and their pockets, to the plights of others. For this reason, Richard Greenberg (a writer on aish.com) says "We (Jews) don't regard philanthropy as an option but as a holy duty." The origin of this mitzvah (commandment) is in Deuteronomy (16:22), where we are commanded עשר תעשר - this refers to giving a tenth of our earnings.

Quick disclaimer: don't expect the money to come knocking on the tenth of every month; Hashem didn't intend for our earnings to show up on the sidewalk nor even to become as fixed a matter as one's salary. Yes, the charity will boomerang back but it's safe to assume that it will happen via natural channels. We are meant to function within the realms of nature - we work to self support. Yet, we can simultaneously bear in mind that it's always G-d Who provides for us. The Hebrew word for world עולם shares the same root as the word that means hidden העלם. One of our main purposes in life is unearthing the reality of Hashem's existence within the illusion of nature. But don't sit around waiting for five dollar bills to come floating down next time you see clouds. Keep making a living.

Also, although the Torah wants us to be givers, it isn't telling us to give away every last red cent. That kind of spiritual plateau, Hashem discourages. Rabbi Nachman of Breslov said he despised the destitute man, the kind who didn't have two dimes to rub together, as well as the fabulously rich one; both tended toward being far too preoccupied with their own goings on to pay enough attention to their relationship with Hashem. Only the greatest of the great permitted themselves to retire for the night once they knew their homes were completely cleaned out.

There are eighteen gradations of giving charity. The greatest form is providing the recipient(s) with a means by which they can support themselves. The least is giving alms only when the poor person asks for it. The spirit of the mitzvah (commandment) all throughout is to empathize with the beggar's pain. Aren't all Jews connected after all?

THE PREVIOUS SATMAR Rebbe, Rav Yoel Teitelbaum, zt”I, had a beautiful minhag in his Beis Hamedrash (place of learning). After morning prayers every Sunday, the Rebbe would select three men and assign them the special mitzvah of approaching all the people in shul to ask them for tzedakah money. ln addition, he requested that these men spend the entire week raising money for poor people. At the end of the week, the men would bring the money that they had collected to the Rebbe, who in turn would distribute it to needy individuals and families.

One Sunday morning, the Rebbe approached his Chassid R” Yisrael Zupnick and asked him to be one of the men to collect tzedakah money that week. R‘ Yisrael was mortified. He was a wealthy man who had always given much tzedakah. and he felt embarrassed asking others for money, even though he knew was not for himself. He just couldn’t see himself doing this particular mitzvah that the Rebbe was asking of him. R‘ Yisrael thought of a plan. He approached the Rebbe and said. “Rebbe, please forgive me. You know l would do anything that you ask of me, but I just can‘t go around asking people for money. Please tell me how much money is collected each week, and l will happily write a check for that amount, which can then be given to the needy.”

The Rebbe answered, “R’ Yisrael, l appreciate your wonderful offer, but I would still ask that you go around collecting tzedakah this week.”

“Rebbe,” R’ Yisrael persisted, “l am more than happy to simply write a check for even more than the amount that is generally collected.” The Rebbe smiled and said. “l knew when l asked you that this mitzvah would not be something easy for you to do. l am insisting that you go around. and l will tell you why. After you spend this week collecting tzedakah, the next time a poor person comes to you to ask for your help, you will look at him differently. lt will be easier for you to feel his pain and to understand how difficult it is for him to approach people for money.”

That day, R‘ Yisrael gained a new awareness. The Rebbe didn’t just want his personal money, but rather he wanted to teach him a lifelong lesson in sensitivity towards the person asking for tzedakah. lt’s more than just giving money that counts; it’s how you make the recipient feel.