Parshat Mikeitz and Being a Shoulder to Lean on

This post is dedicated in memory of Shlomo ben Aryeh Zalman. May it be an aliyah for his neshama
Elisheva Maline 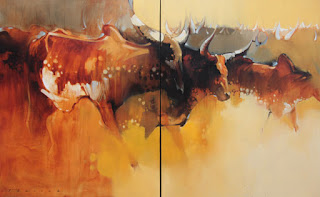 If your friends got you thrown in jail for a crime you didn't commit, and you fell into a state of despondency, who could blame you? It's not really a good time to lay on the tough love. When Yosef's Egyptian boss, Potifar, has the young Jew chucked into prison after Potifar's wife accuses Yosef of making illicit advances, we can imagine he's pretty depressed. Instead of bemoaning his fate, however, Yosef does something astonishing. He continues living.

Right now, Jerusalem is covered in fog and rain. Almost no one is out of doors; in fact, most people have retreated into the comfort of their homes. Perhaps this is why this week's Parshat Mikeitz is there with its storage house of dreams and dream jobs. When humanity shacks up on the darkest nights of the year, we could use a little glimmer in the gloom. Where does the glow come from? The glow is Yosef's amazing optimism: it permeates everything, even his fellow prisoners.

Usually, the atmosphere at prison is pretty bleak. There's the man in the orange jumpsuit, sitting hunched over on his thin mattress. He doesn't look like he's got any day plans. Then suddenly, his ears register the sound of chirping and he glances up in time to catch a blue bird hopping around on the bars of his teeny window before it takes off. His face darkens and he returns to staring at the floor. Jail is no picnic scene, so when two new Egyptian prisoners look extra dispirited one day, no one asks them what's wrong. What's not wrong, after all? They're in jail. Yet Yosef notices that something is bothering them, "And Yosef came up to them [these two inmates] in the morning... and saw that they looked troubled.... And he asked, 'Why do you look so sad today?'" (Gensis 40:6-7).

You know what happens next. Yosef's interpretation of the royal cup bearer and baker's dreams come true. The royal cup bearer goes back to work and the baker goes to his death. Meanwhile, Pharaoh is having dreams of his own about skinny cows eating fat cows and it's really weirding him out. It takes the cup bearer two years to remember Yosef and his unusual gift (which is a lesson in and of itself). He recommends Yosef's services and bam! the young Jew gets catapulted into the second to best job in the kingdom, viceroy.

Although Yosef lived in Egypt with the same purity he had grown up with in his father's home he didn't do it by cutting off from his surroundings. He was very much involved with the lives of everyone around him. And that simple question,  'Why do you look so sad today?' was enough to change his life for the better. Obviously, Hashem (G-d) is always the One orchestrating events behind the scenes. Yosef was meant to become second in command to Pharaoh. From the viewpoint of nature, however, the young Jew displayed a thoughtfulness that showed he was worthy of becoming a leader.

When you fill your time up with kind deeds, it cheers everyone up, including you. Not only that but when Hashem sees you helping His children, He will return the favor. Even when you have every excuse to be lachrymose, don't use grey skies as an excuse to get wrapped up in yourself. Focus on giving to others instead. "Get busy living."