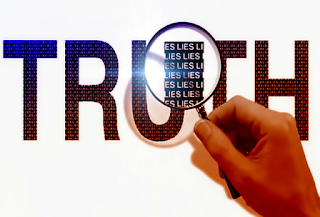 When Adam ate from the Tree of Knowledge of Good and Evil he lost the ability to decipher between truth and falsehood. Instead, humanity got left with a raw deal, that is, having to figure out the difference between good and evil. In other words, truth became subjective. Everyone's got an opinion as to what the words "good" and "bad" constitute. One mother tells off her child for drawing on the wall while his aunt congratulates him on his creative ability.

On a more global scale, truth is constantly in flux. One person's idea of truth can sometimes lead to the misery of the masses. To many, Karl Marx offered the perfect solution to man's selfishness; however, Communism ended up leading Russians to an abuse of power and a miserable reality for the citizens in the USSR. This and many other similar scenarios leads one to wonder, "Is there such a thing as a truth that is one size fits all? Who gets the last say over what constitutes good or evil anyway?" Nations have been chasing their tails for centuries over this abstraction and the truth is: truth is constantly altering its face; you can't really pin it down. Take America for example. Americans considered abortion murder several decades ago; now it's seen as a valid option for woman who aren't ready/ don't want to take on the responsibility of child rearing.

That being said, how would it be possible for people to arrive at a revelation of objective truth? In one word: G-d. Or, to be more precise, figuring out what it means to do the will of G-d. This is easier said than done. My article addresses this idea in the following way:

There is a general rule in Judaism that for the sake of peace it is permissible to lie. However, falsehood is one of the prohibitions in the ten commandments. How can we run with what seems like a contradiction? Obviously, the idea requires a little more clarification. To illustrate, in Genesis, one of our forefathers, Yaakov (Jacob), was told by his mother to disguise himself as his elder twin Esau and to deceive his father Yitchak (Issac) into giving him the blessings of the bechorah (eldest son). Since Yaakov was considered the embodiment of truth, naturally, he found Rivka's suggestion repellent. When he protested, "Perhaps my father will touch me. I will appear as a deceiver in his eyes and I will bring upon myself a curse and not a blessing," she replied, "On me is your curse my son. Only, hearken to my voice and go..." (Genesis 26:12-13). Leaving aside many more details and getting to the bottom line: Yaakov was doing G-d's will although it appeared as deception.

As a follow up to the above, I read a wonderful article by Aryeh Citron on when it is permissible, even preferred, for a person to deceive others for the sake of peace. Keep reading.

"It seems that the pressing need [for Yaakov] to receive these blessings overrode the general prohibition against deception. ...we find that in certain circumstances it is permissible or even commendable to lie. The reason for this is that the biblical commandment against lying only includes a lie that will be harmful to someone else, as the verse says: "Distance yourself from words of falsehood; do not kill an innocent or righteous man." That is, it is forbidden to lie in a way that might cause death or harm to any person.
It is only by rabbinic law that it is forbidden to tell white lies as well, as the verse says : "Indeed, they deceive one another and do not speak the truth; they have taught their tongues to speak lies, they commit iniquity [until] they are weary." And in the words of King Solomon, "Distance falsehood and the lying word from me." Nevertheless, in cases of extenuating circumstances, as will be explained, the rabbis were lenient.
And we are told that a lie told to promote peace (as shall be explained) is not included at all in the prohibition of telling lies. It seems then that since the ultimate goal of this lie is a positive one, it is not prohibited.
One may "change the truth" for reasons of peace. We derive this from a conversation between G‑d, Sarah and Abraham in Genesis. Sarah said to herself: "After I have withered will I get smooth skin, and my husband is old." When G‑d repeated her comments to Abraham, he said that Sarah had said: "How can I give birth when I am old." As Rashi explains, G‑d changed Sarah's words so that Abraham would not realize that Sarah had made a denigrating remark about him.
Aaron the High Priest would employ this method when he would try to make peace between quarreling spouses and friends. He would approach one party and tell him that the other party really is sorry and wants to reconcile. When the person would hear this, he would express an interest in resolving the dispute. Aaron would then go to the other party and tell him this fact. At which point, everybody would make up. The Rif [a commentary in the Talmud] says that it's actually a mitzvah (commandment) to lie in this way in order to maintain peace.
Other examples of permitted white lies include:

So there you have it folks. While lying may be sometimes recommended, Judaism does not encourage pathological liars. May we all be blessed to find peace within ourselves and among our friends and family.

Email ThisBlogThis!Share to TwitterShare to FacebookShare to Pinterest
Labels: lying for the sake of peace, shalom bayit