This post is dedicated in memory of Shlomo ben Aryeh Zalman. May it be an aliyah for his neshama.
By Elisheva Maline 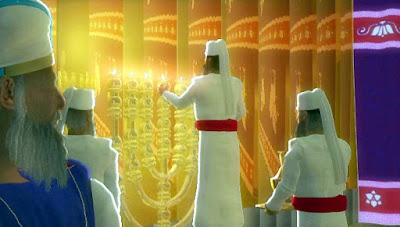 For whatever reason, Aharon the high priest, had chalishut hada'at, a weakening of spirits, after the previous Parshat Naso's description of the chanukat hamisbaiach (establishment of the alter) and the voluntary sacrifices which the tribes' leaders brought. A little melancholy from a man who already does so much around the mishkan (sacrificing animals at the alter daily, bringing in the ketoret spices etc.) is a little baffling - what was bothering Aharon?

Simply put, he wanted to be part of the voluntary process the nesi'im (tribal leaders) were privy to but since he couldn't he was bummed out. Thus, in this week's Parshat Beha'alotcha, HaShem (G-d) comforts Aharon by commanding him regarding the lighting of the menorah (candelabra) in the morning and evening. Why should this cheer him up, though? He's not volunteering to light the menorah; this is just another obligation.

Not so. Ramban explains that Aharon's lighting the menorah was Hashem's way of hinting at an event of special significance for future generations. Who saved the day during the Greek take over of the Land of Israel? Who reestablished the holy service at the temple for us when all seemed hopeless in a time when the Greeks blackened our eyes? The Hasmonians, or in other words, the descendants of Aharon.

But still, what does the menorah have to do with chanukat hamizbaiach, the establishment of the alter at the mishkan (tabernacle)? This is where Ramban's brilliance takes front center stage: because of the Hasmonians central role in The Chanukka Story, the Jews were able to bring about a new age of service in the Beit Hamikdash (Holy Temple). Did I forget to mention that this service was reinstated with the lighting of the menora? Also, note the connection between the words Chanukkah and Chanukat habayit (the ceremony of establishing a home). Although Aharon was not able to participate in the establishment the mizba'ach, his descendants' are more less linked with the deed through the Chanukkah story. Thus, the high priest was comforted.

The menorah symbolizes wisdom. Aharon lit it every day, twice a day in correspondence with the Jew's obligation to recite the shema yisrael (Hear O' Israel) twice daily. Why every day? Why twice a day? To teach us that our Torah learning should be looked upon with fresh eyes every day for it says in the shema, "To keep the commandments that I commanded you today." Look upon it as if you had just learned it for the first time.