pirkei avot 3:5 - Something's got to give

This post is dedicated in memory of Etya Sarah bat Yitzchak ha-Levi. May it be an aliyah          for her neshama.
Elisheva Maline 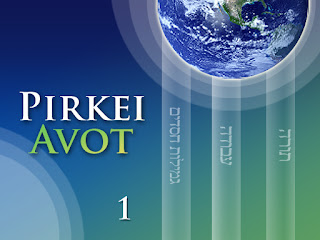 In the Book of Genesis, Yaakov, the father of the twelve tribes, and his twin brother Esau were originally meant to be partners. Yaakov was destined to be the learner while Esau would work the land and both had planned to give a fifty percent cut of his earnings to the other. That is, until Esau decided to drop out. This resulted in Yaakov's having to shoulder both the Torah learning and the working in order to sustain himself and his family. This is also how his load came to be manifest in his two sons Yissachar and Zevulan.

Thankfully, it was always clear where Yaakov's best interests lay. "I [Yaakov] was a sojourner in the house of Lavan [Yaakov's uncle]," i.e. although Yaakov lived by Lavan his swindling uncle for two decades, and although he became exceedingly wealthy during that time, Yaakov never lost sight of the ikar (primary focus) which is serving G-d and keeping the Torah's laws.

When "The L-rd said to her [Yaakov's wife], 'Two nations are in your [Rivkah's] womb and two kingdoms will separate from your innards. One kingdom will be mightier than the other...'" (Genesis 25:23) what implications did this have for future generations? Esau and Yaakov were never going to end up in a fifty-fifty partnership; Esau's evil inclination was too strong. Instead, both became the fathers of nations who hated each other. By the way, the degree to which the Jews follow G-d's law predicates whether Esau's nation will reside under the Jewish thumb or vice versa.

Generally, the words "One kingdom must always be mightier than the other," is also an indication that there are only so many places a person can put his energy. A man cannot put all his energy into his job, family and the community. Something's going to have to give. The same goes for one who wants to place equal amounts of attention in both his Torah learning and a graduates degree. Something is always going to have to foot the bill. The only question is: what? The phrase that Rabbi Nechuniah penned so many centuries earlier, "One who does not accept upon himself the yoke of Torah learning must accept the yoke of government duties and worldly cares." is an echo of the above prophecy which Rivka was told concerning Yaakov and Esau.


As individuals, we are more or less responsible for manifesting the kinds of lives we want. If we would like to be Torah scholars, we cannot expect money to scrape itself off the trees. However, Rabbi Nechuniah does tell us that G-d will see to it that our lives are made easier so that if we do desire it we can live like scholars. There won't necessarily be fish eggs for dinner but there will be food on the table. On the flip side, if we make working for out bread the priority, G-d will take a step back and allow us to look after ourselves and essentially, his role in our lives will shrink.

The bottom line is that we make choices and we live with them. That being said, which choices do we need in order to find ourselves living the lives we want?