This post is dedicated in memory of Shlomo ben Aryeh Zalman. May it be an aliyah for his neshama
By Shoshana Rosa 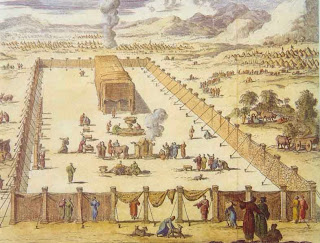 This week's parshat pekudai is the wrapping up of several sagas: we have reached the end of sefer Shemot (the book of Exodus) so be ready to jump up and say chazak chazak at shul (synagogue) with the men and women this shabbos. Also, pekudai is the last of the four parshiot which deal with the plans and building of the mishkan (tabernacle). In Parshat Pekudai Moshe makes a final accounting of all the materials which Bnei Yisrael (the Jews) had been donating for the last few parshiot (Torah chapters). Next, Betzalel and his assistant, Ohaliav, ready the priestly garments for the upcoming inauguration. Moshe initiates Aharon and his four sons into the priesthood. Finally, the cloud of glory comes to rest on the mishkan and Hashem's (G-d's) glory fills the mishkan, signifying that He is satisfied with current events (40:34-35).

While I am sure some of us are heaving sighs of relief, "Whew, these last few weeks have been all technicality and no story!" I know others have thoroughly enjoyed learning about the process bnei yisrael (the Jews) underwent in order to bring G-d into their midst. What do I mean by 'bringing G-d into their midst?' G-d cannot be bound within the limits of space and time. Let's take a closer look. At the beginning of parshat Teruma, Ramban (Nahmanides), a famous Torah commentary from 12th century Spain, explains that the mishkan's sole purpose was to be a resting place for G-d among the Jewish encampments for it says, "Make for me a mikdash (holy place) and I will dwell inside them" (25:8), inside them meaning make Me a place that will serve as a physical reminder that I am with you and that I am watching over you so you better be toeing the line.

When clarity hits, it hits with the shock value of entering a well lit room after climbing a gloomy stairwell. For some of us, lucidity comes gradually, like the sun rise. Everyone knows that even after seeing the light, it only sticks around for about as long as it takes for a bolt of lightning to flash across the sky. Then, our minds are once again cloaked in uncertainty. However, it is not a cruel irony that G-d created people this way; after all, where would free will be if there were no shadows and phantoms to grapple with?

The generation of Jews in the desert were a different story altogether. In order to serve G-d on the levels that were expected of us, in order for us to have deserved to have His presence next to our encampments, we needed constant clarity. According to the Ramban, this was the reason we built the mishkan. At the Sinai event, the world was lit up with clarity. There is a G-d! No doubt about it. After the sin with the golden calf, however, after the Jews left the scene and went deeper into the wilderness, they needed something to tide them over until they got to the Land of Israel. The mishkan was meant to serve as a temporary dwelling for G-d's glory, a reminder that G-d's still around and everyone can relax.

Based on this explanation for why the mishkan came to be, the tabernacle was sometimes dubbed the portable Mountain of Sinai, or in other words, constant, consistent clarity. May we be blessed to welcome good influences in our lives. Chazak chazak!