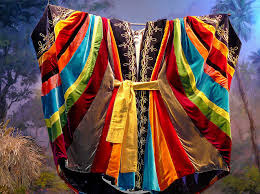 Ever notice how life sometimes takes a turn for the unexpected? Some people might call the events in this week's Parshat Vayeishev as dysfunctional as an episode of the The Sopranos, (lihavdil). I say, let's delve into the story a little. I heard a lecture last week (Rabbi Dovid Orlofsky) which gave me a much better understanding regarding why Yosef's brothers had to sell him into captivity for a handful of spices.

Two chapters ago, Yaakov fled from before the murderous, bloodshot eye of his twin brother, Esau. The side benefit? He found a wife at his uncle's house in Charan. After receiving Lavan's consent, Yaakov ended up betrothed and married to two daughters. Over the next fourteen years, he bore ten sons. On the arrival of his eleventh, Yosef, he decided that it was high time to return home. "It came to pass, when Rachel had borne Yosef that Yaakov said to Lavan, 'Send me away and I will go to my place and to my land'" (Genesis 30:25). What changed? What power did Yosef possess that made Yaakov feel ready to face his twin?

At this point, Rashi calls our attention to how the forces of Yaakov, Yosef, and Esau relate to one another.

Unlike Avraham and Yitzchak, whose kids Ishmael and Esau denied any desire to follow G-d's path to Torah and mitzvot (the 613 commandments), Yaakov's children were all righteous and in effect, became the solid basis for a Jewish nation. In short, no descendant of Yaakov's has the ability to lose himself to cultural influences. Once a Jew always a Jew. However, that does not mean our nation is entirely in the clear. While a Jew can never wholly rid himself of his Jewish status he can still cover up his origins with non-Jewish dress and custom. This is what gives the force of Esau, which represents the bulk of non-Jews (the Christian communities etc.), allowance to hurt us. After listening to the weeping of Esau Yitzchak blessed him with, "...you will [ultimately] serve your brother [Yaakov], but when you mourn, you will break his yoke from off your neck" (Genesis 27:40). This gives a limited reign to the force of Esau to overpower and crush us, that is, until we reach our senses. When the Jews are strong in their faith and service, the non-Jews are powerless before us. When the Jews falter in their divine mission, G-d makes them vulnerable to the hatred of Esau's children. Did anyone notice this seesawing, herky jerky craziness carrying our nation through the centuries?

Where does the force of Yosef come in? Yosef's life story moves beyond the power struggle between Yaakov and Esau to ensure that Jews maintain decent relations with one another. For the Jew who sees himself as physically or emotionally cut off from his brothers, Yosef's example helps him withstand feeling far away.

In this week's Parshah, everyone asks, "Why did Yosef's siblings sell him into captivity?" I will touch briefly on the actual story. When Yosef shared his two dreams and related how he saw his family paying homage to him, his brothers reacted with confusion and outrage. They suspected Yosef of desiring sole dominion and they protested that it was not his place to do so. So they sought to get rid of this youngest, this pest, and sold him for several bags of oregano. Yosef went down to Egypt where he lived among the non-Jews for twenty-two years. He didn't always have it bad, though. He slowly climbed the social ranks and made it to viceroy, second in command to Pharaoh.

With all that Yosef dealt with in mind, if Yaakov's youngest had assimilated, if the word family had become as disgusting to him as a curse, who could hold it against him? However, he will come to show in next week's Parshah that this was not the case. At the next sibling reunion, a little over two decades later, Yosef revealed his identity to a group of gobsmacked family members and in the same breath he forgave them. Not only that, he told them that he understood where they were coming from, that in all the years he was away he had never nursed a grudge. Was he hurt? Perhaps. Was he lonely? One can imagine. That didn't stop him from loving them.

I used to wonder why the events in this week's Torah portion had to take such an uncomfortable turn. For the first time, I started understanding. In order for us as a people to get along we need the example of a Yosef who had suffered so much at the hands of his siblings yet still managed to see them for what they were: his brothers. That's love. That's being Jewish.