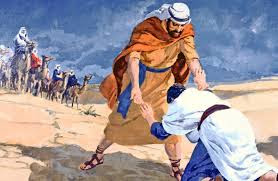 In this week's Parshat Vayishlach, we get a play by play of Yaakov's confrontation with his twin brother, Esau. After twenty two years away from Israel, our young hero returns home laden with four wives, eleven sons and a daughter. Naturally, he is very excited to see his parents again. For those not familiar with the story line, there may be the question of why Yaakov left to begin with. In Parshat Toldot, Esau, who had been dubbed Edom, which in Hebrew means red and is quite revealing, swore to murder his brother in cold blood (Genesis 27:42). In response, Yaakov fled.

There is a deep lesson here. While Yaakov is, indeed, referring to the same person, he is also indicating that he may need rescuing on two fronts. Sometimes, it's clear who the bad guy is: he's chasing me down the block with an exacto blade. He's the Esau who swore to kill Yaakov. Other times, recognizing the bad guy is not so simple, especially when he's smiling and handing me a cup of Starbucks. In the case of Yaakov's brother, the pasukim [verses] are murky with regards to his true feelings for Yaakov. Does Esau hate and want to murder his brother or doesn't he? Here's what the text tells us, "Esau ran to greet him [Yaakov], fell on his neck and kissed him" (Genesis 33:4). On the surface, it seems like Esau has put the past behind him and Rashi, an 11th century commentary, agrees. To paraphrase, Rashi says that although Esau hated Yaakov, in the moment he spotted his twin, he kissed him with a full heart. Other commentaries offer a more sinister explanation. One famous commentary says that little dots cover the space above the word "וישקהו, and he kissed him" as a way of hinting that Esau is pretending he loves Yaakov. Actually, he's attempting to bite him in the jugular. So, I like the guy offering me free coffee but if I discover that the liquid is poisoned, I will put the mug down and steal away, "This guy was trying to poison me. I will run before he attempts to lure me into another false sense of security." This is the brother who hugs and kisses Yaakov.

Over the centuries, anti-Semites have displayed various forms of hatred toward us. Many of them were difficult to ignore: the pogroms, numerous expulsions from European countries: England, Spain, Portugal etc. The Italians erecting ghettos in Venice and the idea taking off like wildfire. Over the centuries. we've been segregated, scorned and spat on. Who were the bad guys? It was pretty obvious.

However, in the 18th century, when Napoleon Bonaparte sought to emancipate the Jews from their old restrictions, many of them did not recognize the evil glint hiding behind the non-Jewish ruler's intentions. Historian Rabbi Berel Wein claims that Bonaparte was interested, not in the Jewish nation's welfare, but in their becoming assimilated. Wein says,"Napoleon's outward tolerance and fairness toward Jews was actually based upon his grand plan to have them disappear entirely by means of total assimilation, intermarriage, and conversion." The above is just one example of Esau's bite disguised as a smooch.

How does Yaakov deal with Esau's turnaround attitude? After making an introduction between his family and Esau's army, Esau proposes traveling together, "He says [Esau], 'You travel and I'll walk alongside.'" (Genesis 33:12). To this Yaakov replies, "You go on ahead, I'll catch up to you later, in Se'ir" (Genesis 33:14). Esau complies and Yaakov proceeds to turn his family in the direction of Succoth, or in other words, not in the direction of Se'ir.

We have a rule in Judaism that one must see the Torah as a manual for living, not just as a nice narrative of an ancient history. When Esau threatened to do away with Yaakov, Yaakov responded by fleeing. Afterward, when Yaakov's brother threw him off with words of kindness, Yaakov regained his footing and sidestepped disaster with finesse. After all, who wants to hang out with violent mood swings? Parshat Vayishlach not only teaches us that we must ditch the bad influences, it also shows us how.