kivrei tzadikim - The burial spots of the righteous - in Israel 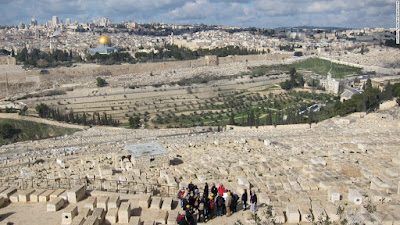 If you are familiar with Zodiac, you will know that the four basic elements are air, earth, fire and water. Every person's personality is dominated by any one of the elements. People who are air signs tend to use speech as their main asset; they exist in the world of ideas. Earth signs are usually down to earth, practical thinkers. While loyal and steadfast they might also be lethargic and sad. The water sign's power lies in his ability to learn from everyone; like water, he tends to take the form of whatever environment he's in. Fire signs are ambitious, goal oriented and passionate.

Air, earth, fire and water are also represented by the four main cities in Israel: Tzfat, Chevron, Tiberias and Jerusalem. There are many tzadikim (righteous men) buried in each of these places. I will mention one or two in each of these places as well as how that tzadik's personality is connected with the city's energy.

Tzfat is the city of air. She is nestled at the top of a mountain so that on rainy days, when the clouds hang low in the sky, one can picture himself floating on air. History shows that Tzfat was a magnet for people who sought to learn the secrets of the Torah. It became the home base for the teaching and schooling of kabbalists (men who study the mystical aspects of Torah).  Before the Ari"zal (Rabbi Issac Luria) moved to Tzfat and opened his two institutions, he led the life of a recluse for seven years during which he did little else beside meditating and learning. Elijah the prophet often visited and made him privy to information that the every day man is clueless about. When the Ari"zal's name became renowned, people would make arduous journeys to Tzfat and seek his advice in hidden matters, such as what one's personal mission in his lifetime was. The Ari"zal is buried in the Tzfat cemetery.

Chevron is dominated by the element of earth. It's main claim to fame is in its being the plot of land Adam, Eve and our forefathers designated as their final resting place. The city itself looks like a throwback to Biblical times. Chevron's homes are hewed from stone, with curved Middle Eastern style windows. The residents dress in layered, colorful and/or white robes and glide around in Gladiator sandals; the married women wrap their hair in turbans. Upon exiting the bus, one may notice the giant staircase flexing toward the building with the kevorim (burial places) of Adam and Chava (Eve), Avraham and Sara, Yitchak and Rivka and Yaakov and Leah. The enormity of it is enough to take one's breath away. The place is verily soaked in history.

Whenever I get a chance to daven (pray) in Chevron, I usually pause at the bottom of those steps and imagine myself standing at one end of the timeline that is our Jewish heritage. Then, as I trek up, one step following another, I watch myself walking backward through the pages of history. When I get to the top, I am thrilled to find myself returned to Mesopotamian times with my forefathers and mothers. Other times, I contemplate over the bigness of our chapter in history. After thousands of years being shipped from country to country, the Jews are finally coming home, sometimes in trickles, sometimes in droves.

Many of the great sages who are buried in Tiberias are ones who not only adapted themselves to difficult circumstances, they did great things, like torches in a cave will, to force the shadows back and alter the reality of situations. Rabban Yochanan ben Zakkai, for instance, the leading sage prior to the destruction of the Second Temple, understood that Roman rule was inevitable and that a mass rebellion would be a fruitless endeavor. Instead, he asked Vespasian for Yavne and its sages so that the continuity of Torah would not die. He didn't fight the situation, he flowed with it.

Rabbi Akiva, who began learning aleph beit (the Hebrew alphabet) at the age of forty and ended up, twenty four years later, one of the leading sages in Israel, is a classic example of one who adapts himself wholly to his environment. When he went to learn among the wisest in Yavne, he soaked everything in, compartmentalized the various bits of information according to their respective categories and eventually, began teaching. Who says an older person cannot learn?

Rabbi Akiva's burial spot has a gorgeous view of the Kinneret and is an ideal place to pray. During the Temple period, Tiberias was considered a huge learning center for Torah scholars. Nowadays, the city of water is not much more than a tourist spot. The promenade by the Kinneret as well as the Kinneret itself are beautiful spots to vacation.

Let's not forget Jerusalem, home to the Temple Mount and the location for our eventual rebuilding of the Holy Temple. Jerusalem boasts the most yeshivas and seminaries (centers of Torah learning) as well as the kinneset, the base where Israel's political parties gather and struggle to reign supreme. Everyone in Jerusalem has an opinion, even the taxi drivers. The city pulses, "Do, do, do, go, go, go..." Many great tzadikim from over the centuries have requested to be buried in Jerusalem. I will mention one of my favorite contemporaries. Rabbi Yaakov Yosef Herman, who moved to New York in the early 1900's. Toward the end of his life he bought a passage to the Holy Land. After he passed away, his daughter wrote a biography about her father and titled it All for the Boss. She pointed out how he had dedicated his entire life to the project of helping the masses learn how to bring G-d into their lives. He encouraged the Jews in New York to follow the halacha (Jewish law). At one stage, he would circle an open market on Friday afternoons, asking the Jewish vendors "Would you be willing to close up shop for the holy Sabbath?" When the vendors laughed in his face and retorted, "How will we put bread on the table if we don't have money?" he offered to compensate them. Eventually, that street, and the surrounding streets, became empty of Jews on the Sabbath. Rabbi Yaakov Yosef is buried in a cemetery called Har haMenuchos (the mountain of those at rest).

May we be blessed to join the ranks of those who have exploited their basic personality traits, and utilized their latent potentials to the best of their abilities. May we be blessed to be surrounded by good influences and wise teachers. May we always be growing, and striving.