How did Intermarriage Become so Commonplace?

Why is assimilation so common today? Reasons abound, However, I would like to offer one source: Fiddler on the Roof. In "What's wrong with Fiddler on the Roof" Ruth R. Wisse, a professor at Harvard, distinguishes between the kosher Jew from Shalom Alecheim's original play and the not-very-kosher-Jew in the version which American screen writers adapted for American audiences. 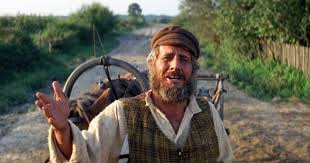 In the original story, Shalom Aleichem introduces us to a Tevye who, despite being "defied by his daughters and challenged by his potential sons-in-law, manages to emerge morally intact. This is how we learn to appreciate his resistance to the historical forces that are trying to undo him. Economic hardship, Communism, internationalism, materialism, persecution, expulsion, and, by no means least, romantic love: powerless as he may be to stop their advance, Tevye is not mowed down by any of them." Yiddish culture, the plays and stories, usually present an ongoing theme: applaud the Jew who remains staunch in the face of persecusion, expulsion and pogroms. Cheer for the Jew who keeps his integrity in the case of personal affronts: becoming seduced by ideas which are alien to the Jewish belief system, self doubt, self deprecation and a lurking fear of public disapproval.

In the 1971 film musical, Tevye follows halacha (Jewish law); he even has frequent conversation with G-d. However, his knowledge of religion has gaping holes. "How do we [the practicing Jews] keep our balance?" Tevye asks his viewers. "Tradition! You may ask, 'How did this tradition come about?'" The dairyman pauses. "I don't know."

Not knowing can lead to a faulty education. This explains why Tevye's first three children, all independent thinkers, defy tradition by marrying the wrong men. Tzeitel chooses a poor tailor over the matchmaker's suggestion, an old, wealthy butcher. Hodel falls for Perchick, a Marxist Jew who shows an open contempt for halacha (Jewish laws). Shortly after, Hava is rescued by a Ukraine goy from a gang of hecklers. They make a connect over literature, "Oh, happy conversation with an intellectual who thinks outside the box!" For the young Jewess, the next logical step is conversion and marriage.

One after another each daughter approaches her father with the news. Tzeitel begs for permission to marry her tailor, as is befitting tradition if not actually a halachic law. Hodel pleads for his blessing, not his permission. Hava cries for acceptance. Tevye, put on the spot, recognizes that he is in a bind: his daughters' happiness or his religious views? He goes into a corner to reason things out. Usually, he talks himself into granting his daughter' permission, "On the one hand, they made a pledge - absurd! On the other hand, he loves her..." Regarding Hava, though, he whispers, "Can I deny everything I believe in? On the other hand, can I deny my own daughter? On the other hand, how can I turn my back on my faith and my people? On the other hand....NO! There is no other hand!" and Tevye stomps away. He remains firm, up to a point. Right before the closing credits, he breaks down and offers his blessing to Hava and Fyedka, "G-d be with you."

Thus, the American adaptation of Fiddler flaunts a variety of breakdowns in the "tradition," as well the halacha, which is passed down from generation to generation. Perhaps the following examples will shed light on why today's Jews are shockingly cavalier about their faith. Firstly, there's the uncomfortable reality that the budding shoots of Jewish communism already betrayed a low tolerance for halacha (Jewish law), At Tzeitel's wedding, right after the rendition of "Sunrise sunset," Perchick climbs over the mechitza (barrier) between the men and women's section, "Who will dance with me?" The crowd's horrified, "That's a sin!" almost drowns out Tevye's compliant "His ideas are a little different..." Tevye's wishy washiness shows a lack of conviction toward the importance of halacha; once he is openly challenged he  stutters. When it come to tradition he shouts and screams but the halacha? So the wedding guests turn to Anatevka's Rabbi for confirmation, "Is dancing with a girl a sin?" The Rabbi hesitates, "Well, it's not exactly appropriate..." The crowd erupts into fighting; Perchick ignores him anyway; Tevye and everyone else joins in when they see Perchick dancing. What underlying messages are the film makers trying to give us? That Rabbis and halacha are not to be taken seriously? That shtetl Jews realize they are "backward" thinkers and are dying to get out of the square mindedness the first chance they get? After all, their jumping into the mixed dancing with unthinking gusto after the initial rejection is unsettling. Yiddish culture is a genre fighting for its right to exist. If the universally minded [i.e. the film makers etc.] are pro intermarriage, is it any wonder that the rates of Jews intermarrying have shot through the roof since Fiddler came to the American stage?

Before Napoleon Bonaparte emancipated the masses from the ghettos, countries like Italy, Spain and Portugal did not offer Jews the enticing world of assimilation. However, when the boundaries that segregated and protected us from outside influence became corroded, our people sank into the morass of non-Jewish culture. When a Jewish man marries a non-Jewish woman, by Jewish law his children are not considered Jewish.


When all is said and done, why should an assimilated Jew muster up energy for something which has little more than nostalgic relevance, if any, to his life? Even Chaim Topol's Tevye had trouble telling us why he was upholding a tradition he couldn't find a source for.  If terms like Bar-mitzvah, Shabbos, Passover, and Hannukah do not bring up a world of meaning inside the heart and mind of any Jew, religious or not, he must recognize that he is missing the soul of Judaism. He must take time to ask himself, "Why am I following all these rules?" or "Why do we need to do this?" I always wonder, "How can I make Judaism more meaningful to me?"

What does it mean to be a Jew? For me, a Jew is about finding out how to commit oneself to revealing the light of G-d in every nook and crevice of his life. This can take a lifetime.

Email ThisBlogThis!Share to TwitterShare to FacebookShare to Pinterest
Labels: assimilation, fiddler on the roof, Intermarriage, Judaism