This post is dedicated in memory of Etya Sarah bat Yitzchak ha-Levi. May it be an aliyah for her neshama.
By Shoshana Rosa

This weekend we will be completing end of Sefer Bamidbar (the book of Numbers). While I have already brought up the following idea in previous articles, it bears repetition: our tradition states that whenever we come to the end of a book of Moses, the entire shul stands and calls out "Chazak! Chazak! vu'nischazeck," "Strength! strength! And we will be strengthened."

The desire behind this seemingly monotonous phrase is explained as follows: when it comes to aptitude in learning there are two kinds: one who thinks he knows nothing and one who believes he knows everything. At the end of each sefer we reiterate that if the two men would just get together, the material covered would be tremendous. 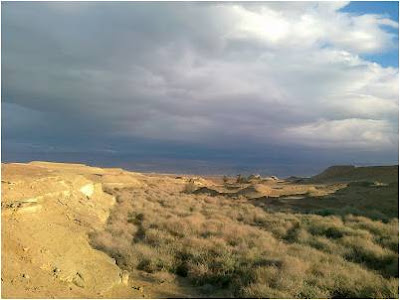 In the last book of the Harry Potter series, Dumbledore told Harry, "It is a curious thing, Harry, but perhaps those who are best suited to leadership are those who have never sought it. Those who, like you, have leadership thrust upon them, and take up the mantle because they must, find to their own surprise that they wear it well." (Harry Potter and the Deathly Hallows)

Lihavdi (the opposite), during our long difficult trek through history, people picturing Jews as leaders was a rarity. Even as a budding nation in Egypt, we were shoved into the role of slavery. Then, after our exile by Rome, we were simply too busy putting bread on the table to chase the glories of that coveted position. When push comes to shove, though, our indifference to posts of power, save to give our people a voice in the bureaucratic system (Rambam in Egypt, Abarbanel in Spain etc), stemmed from the principle (pirkei avot 1:10) which says, "Al tisvada l'reshus," "Do not become familiar with the government" because politics are poisonous; they leech on his morality.

However, from the moment we accepted the Torah, as in, from the moment we began studying the blueprints to objective goodness, we found the mantle of leadership perched proudly on our shoulders. How did this role manifest? The prophet in the book of Isaiah announced, "Be a light unto the nations."

In this week's parsha combination, Matot and Masai, one of the central qualities of leadership is discussed. At the beginning of parshat Matot Moshe explains the laws regarding the making and breaking of nedarim (promises), "If a man makes a promise to G-d or takes an oath, he shall not violate his word. He shall do according to what comes out of his mouth..." (Numbers 30:3). When one makes a promise, essentially, he is fencing himself off from doing something that was permissible before the wording of his promise. In other words, nedarim are temporary prohibitions.

In order to make good choices, and ultimately, to lead oneself or others toward better living, one must have 'constant vigilance' (Mad-Eye-Moody).

By the time we get to Parshat Masei Bnei Yisrael we will have reached the eighteenth leg in their forty year journey. It's interesting to note that each stopover was a mystery; we had no idea where we were headed or which difficulties would be tossed our way: the enticement by the harlots of Midyan, the several bouts of drought, the war with Amalek.... and even so, we sinned only a handful of times (ten times all told). That is incredible. Even now, in the ensuing years since the exile from our homeland, we serve as constant reminders of how to live without budging from our principles. How else could we have lasted so long if not for the fact that we held on to G-d's Torah with all our might? Thousands of decades after his rulership, King Solomon's quote sings, "The Torah is a tree of life for those who cling to it." When we cling; we perservere; therefore, we inspire.

The Ishbitzer rav commends anyone who finds himself in a compromising situation and seizes the chance to build a temporary fence to protect himslef from sin. Let's say an American couple is running late for their flight back from Italy. They realize they are lost. The husband begins asking people if they speak English. At this point his wife quips, "Why is it that men never ask for directions?" Any person might choose this ill timing to get angry. However, we were put into this world precisely for moments like this: nisyonot (tests) are breeding ground for snap decisions that catapult one toward lofty heights. The husband has the option to say, "G-d, I promise not to open my mouth for the next twenty minutes." He will have gained nothing by yelling at his wife but if he vows temporary silence he will end off being a better person, a better spouse.