Parshat Balak - The Mark of a Good Friend 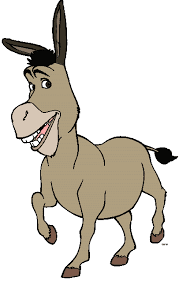 This week's Torah portion, Parshat Balak, serves up several examples on what it takes to be a real friend. One may think that being a friend means tagging along with a pal's hair brained scheming i.e. Bil'am siding with Balak, the king of Moav's plan to curse the Jews (even though the track record for opposing the Jewish nation has never ended well for people). Ironically, a friend's choice to avoid protestation usually becomes the indirect cause of the friend's destruction. On the flip side, a true friend is generally described as someone who will have his comrade's back come thick or thin. He would not hesitate to yell at his friend if and when his friend needed to be told off.

For the first and last time since the beginning of creation, a donkey speaks (with the exception of Eddie Murphy's Donkey from Shrek) and tells its owner that he is in mortal danger even though the owner had struck it several times with a stick for trying to help. That's a friend!

In Parshat Balak, the ripple effect which ignites a chain of bad decision making starts with a request. Balak, the king of Moav has sent for Bil'am, the best non Jewish prophet around. The king is thirsting for a chance to curse the Jewish people into oblivion. Why? After our mass Exodus from Egypt, the splitting of the red sea and our victory in the war against the Amalaikes, every nation was left quailing in their desert sandals. Balak was loath to allow Jews to pass through his lands; he wouldn't even allow them bargaining room for water. "The nation Moav became terrified of the people [The Jews], for they were numerous, and the Moavites became disgusted because of them [The Jews]" (Numbers 22:3). Enter stage right: Bil'am, the only non-Jew to whom G-d had bestowed the gift of prophesy.

Initially, Bil'am was eager to take the job and a couple of sleepless nights in which G-d warned him that Balak's plan would not pan out did little to deter him. "G-d said to Bil'am 'You shall not curse the Jews for they are blessed'" (Numbers 22:12). Oh! Never mind what G-d said: Bil'am has caught the scent of money. He is hooked.

The next few chapters attest, not just to Bil'am's being the scum of the earth, but to how steeped he is in indecent human behavior. He rebels against the clearest orders a prophet can receive from G-d and fails to carry out Balak's desire to curse Bnei Yisrael (the Jews) anyway: he ends up blessing them at three different intervals instead. One of Bil'am's praises was so sweet, in fact, that our Rabbis of blessed memory decided to tack his last blessing to the first section of our morning prayers. "How goodly are your tents O Yaakov, your dwelling places O Israel!" (Numbers 24:5).

The Midyanite native (Bil'am) proves what an ingrate he is when he blunders in the field of friendship as well. The phrase "A dog is man's best friend" might be attributed to Bil'am's she-donkey. As far fetched as it sounds, his donkey was instrumental in saving his life. The fateful morning Bil'am defied G-d's word, he saddled his donkey and went on a journey. "G-d's wrath flared against Bil'am and an angel stationed itself in his path... and the she donkey saw; she turned from the path and strayed into a nearby field.... Bil'am beat it with a stick to get it back on track" (Numbers 22:22-23). This scenario repeats itself three times until the only friend that Bil'am ever had opened its mouth and said, "Why have you beaten me three times? Have I ever treated you this way before?!" (Numbers 22:28,30). When Bil'am replies in the negative G-d allows the angel who was blocking Bil'am's path, sword in hand, to appear.

After this week's Torah portion the lines, "Haven't I been a good donkey to you since the time you began riding me? Why are you treating me this way?" echo. How often do our parents, spouses, and our friends turn to us with wounded eyes and ask the same question? Learn to recognize the good that your friends desire for you; trust them.