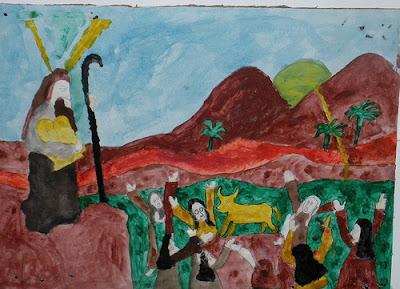 In this week's Parshat Korach we witness opinions clashing over the matter of Moshe and Aharon's right to lead. Korach, a first cousin, challenges them saying, "You take too much upon yourselves..." (Numbers 16:3). Essentially, he was complaining, "Can the leadership of Bnei Yisrael (the Jews) and the leadership of the Kehuna (priesthood) belong to both you and your brother Aharon? Did it ever cross your minds that maybe the two of you are acting like run-of-the-mill megalomaniacs?"

When touching upon the subject of Korach v'adaso (Korach and his company of men), most commentaries agree that the only power hungry person in this situation is the accuser and his 250 men (people he had convinced to join the debate). On the other hand, when one reads the psukim (verses), Korach's argument does seem compelling: "...everyone [the Jews] is holy! We are all witnesses of the Sinai event... so why have you made yourselves the elite?" Korach's question is a fair one, albeit, a tad belated. Moshe and Aharon were appointed as leaders way back in the book of Exodus. Why didn't Korach make a fuss then?

Ah, now we may enter into the murky depths of politics. The reason Korach decided to pipe up at this point is because Moshe had just chosen (as per G-d's instruction) Elitzafan the son of Uzi'eil to be leader of Kehus's (Moshe's grandfather's) descendants. Let me draw out the tribe of Levi's children down to Moshe and Aharon's generation so you can get a clearer idea of what I am referring to. Levi had three sons: Gershon, Kehus and Merari. Kehus's tribe was chosen for the actual service in the mishkan. Next, Kehus had four sons: Amram, Yitzhar, Chevron and Uzi'eil. Since Moshe and Aharon were the sons of Kehus's eldest child, Amram, it made sense for them to have been chosen as the leaders of Klal Yisrael (the Jewish nation). However, when the son of Uzi'eil - the youngest of Kehus's sons, as opposed to Korach, the son of Yitzhar who was next in the line of birth - was chosen as leader, Korach got mad. He forgot who was running the show: neither Moshe nor Aharon but G-d.

When Moshe heard what Korach had to say, he fell on his face (Numbers 16:4) because he understood. Behind his cousin's words was a voice crying out with jealousy and bitterness, not a voice calling out for a balance to be reinstated in the leadership. Thus, this week's parsha teaches us how to differentiate between a machloket l'shem shamayim (an argument for the sake of heaven) and a machloket l'shem atzmi (an argument for the sake of me).

Many people see Korach as the Jewish version of a Macbeth whose wife's yearning for power pushed him to rebel against the nation's leaders. Some commentaries argue that his underlying motivations are not so simple to explain away, however. He had several compelling arguments and let's not forget: he also had a following of 250 leaders, men high up in the court system, men who were willing to risk their lives for his side of the argument. Nonetheless, our all inclusive conclusion points to Korach as being the paradigm of machlocket (a division caused by opposing opinions) and the dissonance machloket will bring in the wake of friends and enemies alike. In the end (spoiler alert), his 250 followers are burnt by a holy fire sent from heaven while Korach and his entire family are swallowed up by the earth.

When applying the idea of machloket to our daily lives, we must ask ourselves: am I looking for truth or am I looking to service myself? Figuring out who's on the winning side, those fighting for revealing truth, can be a tricky business. After all, the truth isn't just hanging from a tree, waiting to be plucked and bitten into. Truth must be chased after, hunted; one must be driven if he wants to catch truth and absorb it. Since the concept of truth is such an abstraction, people have different ways of viewing it. One can be almost certain that if he were to approach fifty sets of people and ask them, "What is truth?" he would return with various answers and explanations as to why this one thinks this and that one thinks that etc. Moreover, a person's truth will shift with the context of his life, ambitions and emotions. The essence of truth is a precarious, slippery thing. According to Judaism, however, truth can be objective for those with the determination to seek it out; it becomes a concrete possibility. Hashem offered us the tenets of His Torah to direct us through a dark world whose ever shifting ideas of truths shout, "I'm the real deal. Me. Me. Follow me." Seeks truth via the Torah and one will discover objective truth. What is truth? It is G-d's will. How do we figure out what Hashem (G-d's) will is? We learn Torah. How do we find truth? Learn how to follow the 613 mitzvot (commandments).  Keep tabs on your progress; it's just one step at a time. Stay focused and you will find it.

Email ThisBlogThis!Share to TwitterShare to FacebookShare to Pinterest
Labels: Korah and his company, machloket, Parshat Hashavuah