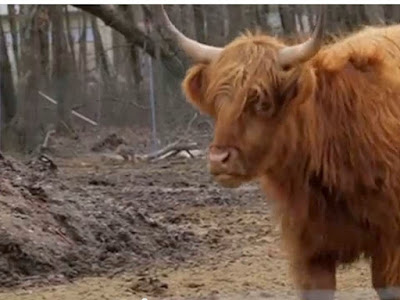 This week's parshat Chukas is about following G-d's mitvot (commandments) regardless of one's ability to grasp the logic behind them. Although many commandments are within human comprehension such as honoring one's parents and dressing modestly, the chukim are a specific set of commandments which are inexplicable. Since the parsha opens with the laws concerning the para aduma (red heifer) it is aptly named. In temple times, the para aduma  was used as a means of purification for people who had become spiritually impure, either through physical contact with cadavers, or open graves or bones. Once a man fell under the status of a tum'a (impure), he had to seek out a kohen (priest) who could purify him by sprinkling on him a concoction which included the ashes of a red cow.

What makes the laws of para aduma a chok is that they are paradoxical. The kohen who went through the process of purifying an impure Jew must have been spiritually pure. However, once the priest had "showered" the man with ashes the priest became impure. Even more fantastic, an impure man became pure only after he had a dusting of ashes thrown at him. Touching a dead thing made him impure and yet the ashes of a para aduma reverse the process!

After the laws of para aduma, Miriam, Moshe's sister, passes away. The well of water that slaked the Jews' thirst dried up as well.  At this point, the Jews are in an area of the desert called Tzin. It's not the first time they were tested with a threateningly low water supply. However, this time their behavior changed the course of Jewish history. The Jews gathered before Moshe and Aharon. They shouted, "Give us water."

Moshe turned to G-d for advice. G-d told him, "Assemble the people and speak to the rock in their presence so that it will give forth water. Then, they and their livestock shall drink" (Numbers 20:8). Several verses later, Moshe took his staff, struck the rock twice, and water gushed forth. Since he failed to speak with the rock, Moshe is told he cannot enter Israel.

He died in the desert. Till today, the location of his grave is a mystery.

The measurements between Moshe's inability to take direction versus his punishment seem a tad out of balance. After all, the directions were pretty strange to begin with. People talking to rocks; rocks leaking water... Instructions like this are what get people institutionalized.

Our sages have amazing interpretations on the topic of Moshe's failure to talk to the rock. Some of them say that his failure stemmed not from a lack in his personal service to G-d but rather, as a reflection on Bnei Yisrael's inability to meet the standards G-d set up for them. Since this was so, only the generation after Dor Dai'u (the generation after the one which received the Torah at Sinai) became the one worthy of entering the holy land. In the meantime, Moshe and his generation faded away in the desert.

The older man gets the more wisdom he begets. One of the cornerstones in Jewish philosophy is looking to answer questions where questions can be answered. When questions do not have an answer (at least, not in this world), or they only have answers in retrospect, then man must implement his bitachon (trust) in G-d. What can we learn from the concept of chukim? We may not understand G-d but we do need to exercise our ability of knowing that He's got everything worked out.