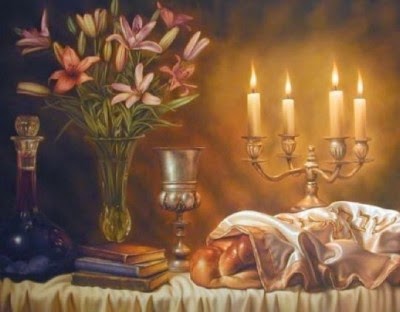 The crowning jewel of Kabbalat Shabbot (greeting the Shabbos) during Friday night prayers is Lecha Dodi, a poem written by sixteenth century kabbalist, Rav Shlomo Alchabetz in Tzfat, Israel. The song reads like a one way conversation between the poem's narrator to his "Beloved" whom he is asking to accompany him while he goes to greet the Shabbos queen.

The narrator of Lecha Dodi is easy to interpret: he represents the Jews; who the "Beloved" represents, on the other hand, has undergone much speculation. There are those who have concluded that "my beloved" is a reference to G-d while others think it is simply one's friends being asked nto accompany one to go greet the Shabbos. The Shabbos queen is Shabbos herself whom Judaism refers to as either a bride or queen.

The theme of Lecha Dodi is redemption. The following story is about a young man finding his personal redemption with the help of a Lecha Dodi.

Coming home from Ramalah
A true story
by Zev Roth

On a quiet street in Jerusalem, Dan wished the Rav of his shul (synagogue) a good Shabbos, shook hands with a few fellow shul goers and headed for the exit. He wanted to get home in time to recite Kiddush (blessing over wine before a Friday night meal) for the family.
As he approached the door, however, he spun around and started eyeing the people filing out. He scanned the shul for newcomers. Perhaps there was someone who needed a place to eat? "Who's that sitting by the side wall?" he murmured. "I know almost everyone here, and I don't believe I've seen him before."
Dan approached the young man and scanned him with an experienced eye. Dungarees, backpack, dark skin, curly black hair. He looked Sephardi, maybe Moroccan.
Dan took a moment more for introspection and then, he was moving toward the boy, hand extended in welcome. "Good Shabbos. My name is Dan Eisenblatt. Would you like to eat by my house tonight?"

"Coming home from Ramallah" touched many hearts. People wrote stories and songs about it. The tale also ties in with our mass Exodus from Egypt thousands of years ago. Every year, around Pesach time (Passover), Jews all over are commanded to experience redemption. Some of our Rabbis have interpreted this to mean a personal redemption: freedom from emotional pain, or something as uncomplicated as cleaning out the extra clothes in one's closet. You could go on a vacation, perhaps clear the air in some strained relationships. Either way, spring is here. The flowers are opening up again and it's wonderful to be alive. I hope Machmud's story brings a spring to your step.