Parshas Va'eira - An Ode to Stubborness

In this week's Parshas Va'eira, Moshe re-enters the scene as the man with the plan. Even better, he is joined by a supporting character, his older brother Aaron, who is given the role of spokesman to aid Moshe with his 'heavy mouth' a.k.a. speech impediment. 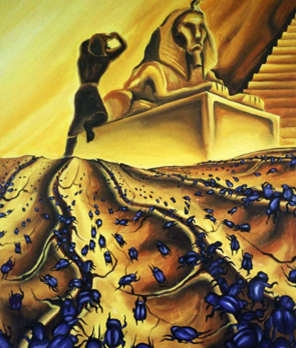 In Parshas Shmos, we witnessed the sequence of G-d's conversing with Moshe from the burning bush and His ordering the ex-prince of Egypt to redeem the Jews from their slavery. "I will redeem them with an outstretched arm and mighty judgments" (Exodus 6:6). Pharaoh is about to taste the kind of defeat he will never recover from. How do we know this? Any world power that ever started up with the Jewish nation had its time in the limelight but then quickly faded into the annals of history. There's ancient Babylonian, Persia and Rome, all exiles under which we suffered but, in the end, emerged victorious from.

When Moshe arrives to Egypt, the first thing he does is make a bee line for the palace. Unlike Disney's "The Prince of Egypt," whose take on the following events leave Moshe feeling guilty for having made Pharaoh, his childhood "brother," feel like Moshe was switching sides by commanding him in the name of G-d to, "Let my people go to the desert so that they may serve Me" (Exodus 7:16), the Torah serves up a crystal clear image. G-d commands Moshe to create rapport with Pharaoh; to speak to the Egyptian tyrant with the kind of respect that is due a king. As for personal history? Nil. There is a lesson of import here: even if one is feeling irritated with authority, even if authority is in the wrong, one must accord honor to a person of stature. It builds character. It strengthens humility.

This does not guarantee that the world power will mirror back the respect owed a leader of equal stature, though. Instead of being nice, Pharaoh threatens to throw Moshe and his brother out of the palace. Did the king think this was the end of the story? I hope not because the ensuing events would've had him tearing his hair out. What follows is an incredible battle of the wills: Pharaoh pitted against G-d. While Hashem gives Pharaoh chance after chance to repent and deign to give the Jews time in the wilderness to worship Him, Pharaoh continuously flakes out on his promises and refuses to let them go. Although Hashem brings a sign in Moshe's stick turning to a snake, Pharaoh is unimpressed. He snaps his fingers and presto, his magicians turn their staffs into snakes as well. Moshe retaliates by having his snake turn back into a stick and only then does it swallow up the other staffs.

Still, Pharaoh waves his hand in dismissal and says, "Okay, fine. You can do neat tricks Moshe but you know what? I don't care. They're my slaves and I don't believe in this G-d of the Jews, anyway. I never heard of Him and that's that."


Wrong answer. Five plagues later, Pharaoh is still refusing to release the Jews from bondage. Was it not enough that Hashem destroyed the water and fish supply with blood? Or, that everyone's chance to get a good night's sleep was ruined when the plague of frogs came calling? By the time the lice and wild animals arrive, even his servants are begging Pharaoh to accept Moshe's request. The next few instances: pestilence, festering, smelly boils and hail of ice and fire momentarily push the proud king to his knees.
It's not humanly possible for Pharaoh to have remained indifferent to all the suffering caused by Hashem's wonders. After dealing with each destructive force, he gets a short grace period post begging Moshe to pray for an end to the madness. This temporary halt to the proceedings doesn't last long. He backs out on his word every time. The line, "And Pharaoh hardened his heart," (Exodus 7:22, 8:11, 8:15, 8:28, 9:7, 9:34) repeats itself so often that I wonder if Pharaoh drank too much blood in the first plague and his brain was unhitched (that was a joke). Perhaps he was trying to teach a lesson on the effects of pigheadedness. Whatever his motives, don't copy him.

When the hail destroys most of the Egyptian crops, Pharaoh whines, "I have sinned this time! The Lord is righteous, I and my people are the guilty ones" (Exodus 9:26). Once again, Moshe prays for the plague to end. Once again, Pharaoh hardens his heart. Go figure.

We're going to be left hanging till next week when the story continues. Stay tuned.