How to withstand trying times

The Vilna Gaon asked a question in his commentary on prayer, “What are the roots of wickedness? Well, if one is looking for the quintessential wicked man and he does this by seeking out the world's sadists, rapists or swindlers, to name a few, he will miss out on 99.5% of the world's rashaim (evil people)." So what did the Vilna Gaon mean? He continues, quoting, "The wicked are likened to a wind tossed ocean..." (Isaiah 57:20). Wherever the wind blows the sea goes. This means that a person, without the awareness of it happening, will be colored by his surroundings. This is the root of evil. If one's environment is thievery, he'll become a criminal. If his surroundings are infused with generosity and kindness, by association, he will become a giver.

There are so many examples brought in literature about people who withstood the test and maintained their moral integrity. For instance, Jane Eyre by Charlotte Bronte. One theme in the story was about the idea of remaining true to one's inner standards in the face of pressure. Jane wanted to marry Mr. Rochester, the man she fell in love with, yet she couldn't be his wife because he already had a spouse.  And what's more, he pressured her to become his mistress which she refused and ran away to preserve her integrity. Jane was schooled as a child in the seat of morality and she shows us how deeply she integrated her values, for when her surroundings changed, she stood her ground and did not alter with them.

There was a Broadway play that opened up in 1985 based on the 18th century novel Les Miserables by Victor Hugo. One of its main characters, a French criminal named Jean Valjean, decides to turn over a new leaf. He is a person coming from the corrupted pit of life as a prisoner and when he reenters society he is encouraged to live with the determination to make life more meaningful. This means changing his name, his identity, and his negative perspectives on a justice system which, rather than aid him in his time of need, abandoned him to rot away in jail. Jean Valjean ventures to make a little money, put a rural town back on its feet financially, and eventually he even gets voted the mayor of the same little town. After the span of ten years the old prisoner has become famous for his generosity and kindness. Then, one fateful day, Javert, a police officer, informs him that the criminal Jean Valjean has been re-arrested (while in actuality they arrested the wrong man) for a highway robbery that Jean Valjean committed ten years earlier, before he became a changed man. Javert also says, "But he couldn't run forever, no, not even Jean Valjean." Now, the real Jean Valjean faces a dilemma which will decide, once and for all: “Who am I?” He asks himself, "Should I confess? It will mean facing a life sentence behind bars. I don't deserve it. People need me. Yet how could I allow an innocent to suffer in my place?"

Although literary works manage to glamorize people's struggles in a way that causes them to appear as 'larger than life' in our eyes, I'd like to remind the reader that there are real life examples to emulate. In a way, these instances impress us more than fictional characters do because they whisper, "This can be you."  During World War II, the ghetto living conditions and the horror of the concentration camps are breeding ground for stories piled on top of stories about people who lost their humanity (and no one can blame them). These same places were also full of events about people who not only remained true to their integrity, they brought light into a place of total darkness. There is a book called Hasidic Tales on the Holocaust, by Yaffa Eliach, a compilation of real life stories about people who refused to become waves tossed about in the storm of war. One such story, called "A Shofar in a Cauldron Pot" told the tale of Jews in Bergen Belsen who risked their lives to smuggle a shofar into the camp in time for shofar blowing on Rosh Hashana. What was touching about the story was not the lengths they went to in ataining a shofar. It was that even though these Jews were living in hell, they were determined to remain Torah, G-d fearing Jews. 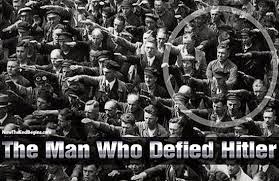 Indeed, when we recognize what our values are, values like kindness, loyalty, honesty, generosity, communication, or sweet temperateness, we will have an easier time withstanding the blowing winds of adversity. See that man in the picture to your right? Adversity is pressure that comes from outside oneself, a wind that pushes one to do something he may not consider morally sound under normal circumstances. Yet how do we know we have the ability to withstand pressure before the pressure arrives?

Start building your wall, one brick at a time. Smile at a person, especially when you don't feel like it. Give charity, especially when you don't want to. The smallest of changes, but give something. In this way, you will find yourself building muscles that will grow stronger with practice. Then, when you are actually faced with a quandary, you may discover that the winds of change, winds coming from within you, are there to fight the winds of your negative environment.