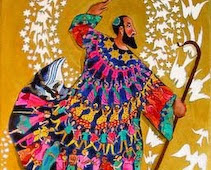 Joseph is the only biblical figure referred to specifically as "haTzaddik" -- "the righteous one." We know that the Bible is full of righteous individuals. What is it about Joseph that marks him out as the paragon of righteousness more so than others?

There is one character trait that we find epitomized in Joseph: He takes responsibility. Starting with his brothers, he tells his father the mistakes they are making. It's not the best way of doing it, but his motivation is sincere. In prison, he ends up running the show. When he leaves prison, he ends up running all of Egypt. When his brothers come to Egypt, he first helps them grow past their mistakes, and then provides for the whole family.

We often think of a righteous person as someone who does a lot of good. But how much good? How does one quantify? The Torah answers for us: It's not enough to just "do a lot of good." In order to be truly good, you have to take responsibility for others.


We all have a good part that wants to give and to share. And that part will naturally express itself at times. Even the most selfish of people will feel like giving sometimes.

Giving to a homeless person in the street means dropping some money into his cup. Taking responsibility for him means sitting with him and talking about what his needs are and then figuring out how to solve those problems. It's not quite as comfortable as dropping him a few pennies. Giving to an office colleague means making her a cup of coffee when you're making one yourself. Taking responsibility would mean proactively approaching her when she seems down, giving her your time, then suggesting concrete ways you could be of assistance.

Giving to your partner means responding to their needs and sharing. Taking responsibility, however, means rebuking them sometimes, even though it might cause friction. It means listening to them and understanding them, not just expressing your own opinion. It means taking time to figure out how to help them grow, then actively and patiently encouraging them to move in that direction even though they might resist initially.

Giving comes naturally -- to a greater or lesser extent -- to every one of us. Taking responsibility for others, however, is the true challenge of giving.

The one who is willing to take responsibility for others in all areas of life -- no matter where it might take him -- is the truly righteous person. That was Joseph.