"Why are You doing this to me G-d?" was a phrase often repeated in my childhood. I personally didn't mind G-d hanging around, just as long as He remained in the passenger seat and let me drive. Years later, I've noticed that for whatever reason, blame it on the fact that people are still trying to back Darwin's 'Theory of Evolution,' some of humanity seems to be having a hard time “Letting go and letting G-d.”

Familial dysfunction, sickness (g-d forbid) and low paying work are just a few frustrating instances that can force a person into recognizing the hand of g-d in his life. The alternative would be to see life's gloomier moments as unlucky twists of fate. For instance, imagine someone cruising along in life, without a care in the world, when suddenly some horrible incident shatters his picture perfect existence. Instead of humming "We all live in a yellow submarine” he/ she may be crying, “Why me, g-d?”
Why indeed?

In Parshas Ki Tissa, Moshe begged G-d, “Show me Your Glory” (Exodus 33:18). In other words, he was asking, "Why does life operate the way it does? What’s going on behind the scenes?" 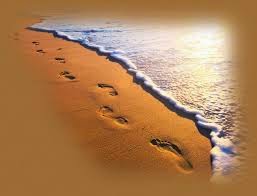 G-d answered, "You cannot see My face; no man can see My face and live" (Exodus 33:20). He was telling Moshe, "No human can gaze upon the various threads that make up the fabric of the universe and still maintain his free will." Free will is the empty space in one's intellect or heart through which he has the ability to pick between two options (or more). In context, this ability to choose can range from big decisions to small ones: "Will I maintain my optimism or become melancholy after my boss fired me?" "Should I eat pizza or something healthier, like quinoa or buckwheat?" The average human being has a disposition similar to that of a one and a half-year-old toddler - we're perpetually wobbly. When our Father in heaven initially sends us a flash of inspiration, everything becomes as clear as daylight. He's like a parent holding our hands, coaxing us to take one step, then another. The power to make choices comes into play only when He “lets go,” thereby forcing us to take a shaky step forward alone, and grow into teaching ourselves that He is the only reality.

Now you know: life isn't a series of Sisyphean events. Every person's experiences aren't only connected to his personal world either, they're woven into the monumental tapestry that makes up an eternity’s worth of Divine planning. G-d simply hasn't made us privy to the pattern detailing.

When does emunah (faith: a clear understanding that G-d runs the world) and bitachon (trust: an unshakable dependency on Hashem and the experiential belief that He is the sole provider of one's life) take center stag When he has learned to relinquish the illusion that “I’m in charge, I direct my life.” Also, please, don’t stop asking questions - Judaism embraces truth seekers who yearn to 'leave no stone unturned.' People with emuna see that this year is like living on one page of a book that doesn't end and that the only thing that matters at the end of a lifetime is what kind of person one chooses to make oneself into.

Make it a good one.