This post is dedicated in memory of Etya Sarah bat Yitzchak ha-Levi. May it be an aliyah for her neshama.
By Shayna Hulkower

Beginning this Saturday night, October 24, and into Sunday evening, is the yahrzeit of Rachel - one of the foremothers of the Jewish people.

She's not burried with the other Matriarchs and Patriarchs in Maharat Hamechpelah in Hevron, but it's for a good reason. It states in the Midrash (oral tradition) that Jacob foresaw the Babalonyian exile from Jerusalem, and purposely buried her on the path the Jews would be taking on their way to Bavel in order to give them some comfort and a spot to pray at before they left their land. It even says in the book of Yirmiyahu, "Rachel weeps for her children, she refuses to be consoled for her children because they are not [consoled]."


It has become common for people praying for children or to find their spouse to travel to her grave site, because this is something she had problems with in her life. First, when she was supposed to marry Jacob, at the last minute her father switched her for her sister, Leah, who married Jacob instead. (As an interesting side note, this is where the custom to say "He lili" comes from at Sefardic weddings. The townspeople knew what Lavan, Rachel's father, was planning to do, and to warn Jacob they yelled out 'she's Leah', which when said very quickly in Hebrew sounds like 'he lili'). Also, while her sister Leah gave birth to six sons, she only gave birth to two, Joseph and Benjamin, and died in childbirth with with the latter son. 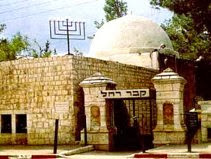 In addition to not having had an easy life, Jews pray at her grave because she did an amazing act by allowing her sister to marry Jacob. Jacob knew that Lavan was conniving, and made up signs with Rachel (think a pitcher and catcher communicating during a baseball game) in order to ensure that he wouldn't marry the wrong lady. Rachel shared these signs with her sister, which is why Jacob didn't know he had been tricked until it was too late (another interesting aside, is that the tradition for the bride to wear a veil to cover her face comes from the fact that Lavan had his daughter walk down the aisle with her face covered so that he could send down the wrong one without Jacob being able to tell). Rachel could have easily not shared this with her sister, and Jacob would have stopped the wedding once he saw he was getting tricked, but in order to save her sister the embarrassment, she essentially gave her the keys to marry the man she really loved. It is a powerful teaching as to how much we should make an effort not to publicly embarrass people, and a testimony to the sensitivity of Rachel.

Today, there is a beautiful building on the spot of her grave site, although unfortunately it is overshadowed by hulking walls protecting visitors from being attacked by the residents of Beit Lechem. Even if you can't make it to Israel for her Yahrzeit, it is still an auspicious time to pray for the things Rachel herself davened (prayed) so hard for.