Creation and the Bombardier Beetle

“Before Creation, G-d looked into the Torah and fashioned the universe. Man looks into the Torah and sustains the world.” (Zohar volume II, p. 161b)  So the Torah is the blueprint for the world and thus, the source of a wealth of knowledge anyone can plumb. Although this is wholly antithetical to ’s theory of evolution, I doubt anyone reading off this website will complain. We are finally in a place, scientifically, where people can plug nature back into its Source.

The natural world has a rhythm. People who do hisbonanus (deep contemplation) will notice, for instance, that every animal represents a human characteristic. Therefore, when one hears the gemara in Eruvin (100b), “Had the Torah not been given we would not have learned modesty from the cat, honesty from the ant, or chastity from the dove etc,” he can lend an ear to the idea that everything on earth comes to teach one a lesson.
I’d like to bring this concept to new frontiers of thought. The bombardier (bom-ba-deer') beetle, at 6.5 to 9.5 mm, about half the size of one’s pinkie finger, distinguishes itself for its ability to thoroughly dissuade predators from “coming any closer.” Akin to an angry female human being, wielding her bottle of mace, these tiny bugs will emit a poisonous spray if disturbed by irritating neighbors. 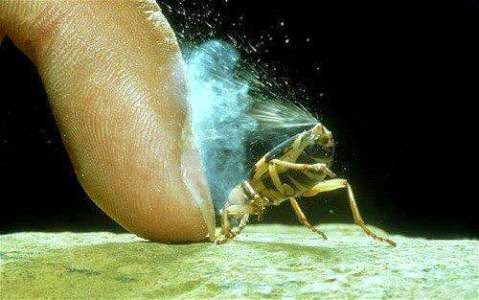 When threatened, the Bombardier beetle will first swing its tail end toward the direction of the pests bothering him, for instance, amphibians or birds. Then, hot noxious gasses – chemical combinations of hydroquinone and hydrogen peroxide – will boil up to 212°F before exploding from two twin combustion pipes, at the tip of the beetle’s abdomen, right into the face of his enemy. He never misses.

The damage caused by this chemical ejection can be fatal to attacking insects and even painful to human skin. Some bombardier beetles can spray their liquid death over a wide range of directions.

What can we learn from the bombardier? One thing I picked up: G-d always gives us the tools to take care of ourselves. While “you can’t always get what you want, if you try sometime, you just might find that you get what you need,” right down to the little ground beetle.  I’d like to challenge the reader to focus his/her attention on something in the near future. It could be the joints in one’s fingers, which give him/her the ability to hold a cup of coffee, type at the computer or fold his digits into a fist. It could be the fact that some species of mosquitoes have forty-seven teeth. Whatever it is, attach meaning to the subjects you notice; it may change your life.