The Shabbos Project - 'Keeping it together'

This post is dedicated in memory of Etya Sarah bat Yitzchak ha-Levi. May it be an aliyah for her neshama.
If I mentioned two tons of sifted flour being prepared for an event and the first thing that popped into your mind was a massive bake sale, you'd be wrong. However, you wouldn't be too far off the mark. The sifted flour used was for the challah baking that took place Thursday, exactly one year ago, in honor of the countrywide South African Shabbos project – keeping it together. Over 3,000 women participated, up to their elbows in dough.


G-d created Shabbos so that man could rest and reconnect with himself, his family and his community. Rabbi Dr. Warren Goldstein, the chief Rabbi of South Africa, wanted to give the experience of a traditional Shabbos to everyone and he succeeded: over 10,000 people from all walks of life came together. That weekend, the streets were lined with tables and Shabbos song, and when it ended, no one was itching to get back to their cell phones. They were living in the moment. 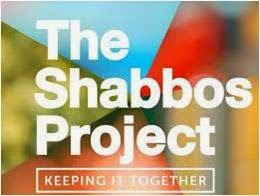 This year, Rabbi Goldstein is once again taking on another Shabbos project, this time expanding to a global initiative. The goal is to bring together one million Jews (if not more). Dr. Warren said, "The Jewish sages remarked that if the Jewish nation were to all keep two Shabbatot it would bring redemption." He pointed out that the teaching shows the great power Shabbat has, perhaps more than all the commandments, in its ability to transform and unite the Jewish nation.

Click here for information and to join the Shabbat Project or Shabbat.com. I'll see you there.