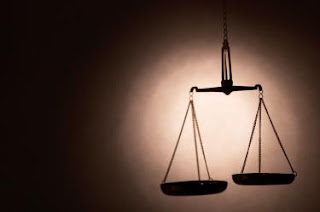 This week's Torah Portion continues the warnings we've been hearing the past few weeks: follow the mitzvot or really not good things are going to happen. This week's iteration is Haazinu, which means 'listen!'. Moshe Rabbeinu goes on for a while warning the people. It's a fiery speech, probably fueled in part with his knowledge he is going to die soon and wanting the Jewish people to remember these warnings.


Soon into his speech (which is actually considered to be a song or poem), Moshe says something interesting, "Perfect are His efforts; because all of his ways are just; faithful G-d, without injustice; righteous and straight is He."(Devarim 32:4) He then goes on to list all of the ways the Jews will eventually go astray and what will befall them. Rabbi Lord Jonathan Sacks comments there is more to this statement than might seem at first glance.

Why go through all the effort of saying how fair and just G-d is, going on for twice as long as the other lines in the song? Because, one should not turn around after being punished and say, "It's not fair!" G-d, if anything, is incredibly fair - even giving a person air in their lungs and energy to do sins. It's very easy for G-d to say, "You are not doing what I want, so I don't have to let you live anymore." But, that's not what G-d wants, He gave us free will so that we can earn the benefit we accrue for making the tough decisions in life, for doing what is right, especially when it's not what we want.

Rosh Hashanah and Yom Kippur marks a time when we hope to be jolted awake, to realize the folly of our wrong ways, and to do teshuva and start the year with a clean slate. According to the Rabbis we have until Hoshanah Rabah to get on the right path. May we all merit to be awoken and be cognizant to any deviations from our intended course, to be judged favorably, and to have a sweet and blessed year!