The new month of Tammuz begins Tuesday night, July 5 at sundown and ends Thursday evening July 7.  It is a bright spot in an otherwise unwelcoming month. The beginning of the summer season, Tammuz is also the beginning of the 'Three Weeks' - a period of time from the fast of 17th of the month until Tisha B'Av, 21 days later. A day of positive note is the 3rd of the month, when Yehoshua caused the sun and moon to halt for 36 hours, giving the Jews extra daylight to fight their enemies. We'll see that the extra light shines throughout the month. While the month is known as a time of danger for the Jewish people, Tammuz also contains within it many gifts, especially for those who are born during this summer month. 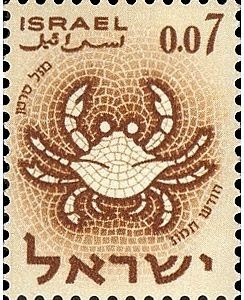 The tribe associated with this month is Reuven ראובן - the first born of all of Yaakov's sons. When Yaakov gives his sons blessings on his deathbed he tells Reuven that he lost the privileges associated with being the בחור the first born son, because of his 'water like impetuosity' (ברשית 49:4). This was his dad's more poetic way of describing his son's haste when doing some creative furniture rearranging in his father's bedroom. Relatedly, of the four elements, Tammuz is a water sign. Also related to the water theme is the symbol for the month - the crab. The crab is known for its painful pinch, but it only brandishes such a weapon because it is quite sensitive? Something important to keep in mind with your friends born under this mazal!

Also related to Reuven is the sense associated with this month: sight ראיה (the letters י and ו are often used interchangeably in Hebrew, so you can see how close the two words are). There is a special power available to see clearer, that is to understand deeper, the world around us. It also can help us to see the beauty around us, which we might otherwise ignore.

The stone for this month is the Ruby, which can be seen on the breastplate of the Kohen Gadol when he's in his Bigdei Kahunah garb. Red is associated with passionate behavior, such as Reuven's, as well as the sin of the Golden Calf, which happened on the 17th of this month. Like all things, it can be used for both good or bad. The part of the body associated with this month is the right hand, which also corresponds to chesed. For this reason Rebbe Nachman said when offered something we should only take it with our right hand. Under the chuppah, the chattan puts the wedding ring on the bride's right hand pointer finger. We here at EmunaDate wish everyone still single that they are blessed to meet their basheret and have them put a ring on it soon!