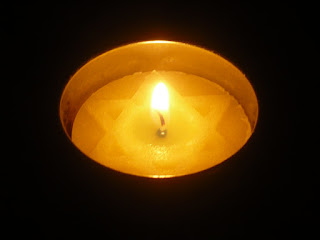 Yom Hazikaron, the memorial day for all the Israelis who lost their lives in a war or terrorist attack, is a very special time in Israel. In a country as small as this one, virtually no family is untouched by the death of someone either fighting in one of the nation's defensive wars or civilian attack. Like on Yom Hashoah, a siren sounds across the country, twice actually, and everyone stops what they are doing to remember the fallen. It is a truly moving moment, regardless of whether or not you have personally lost someone in the struggle of Israel's existence, it is a reminder that we are all in this together. Everyone who resides in Israel is part of one family, who laugh and cry together.

On a personal level, I can say I never really understood Yom Hazikaron when I lived in the United States. Memorial Day in the US is more about a three day weekend, bar-b-que and sales than about mourning the loss of the nation's soldiers, unfortunately. It was hard for me to empathize. It's different here though - places of entertainment are closed. Ceremonies occurring all over the land are on every radio station and television channel. The first siren sounds at 8pm on the evening of the 4th of Iyar, heralding the start of the somber day.The second siren, the next morning at 11am is a reminder to all of us that we are still in this, we don't have our security yet and we won't forget those we have lost along the way. At this time it has also become a custom to say tehillim at military cemeteries across the country.