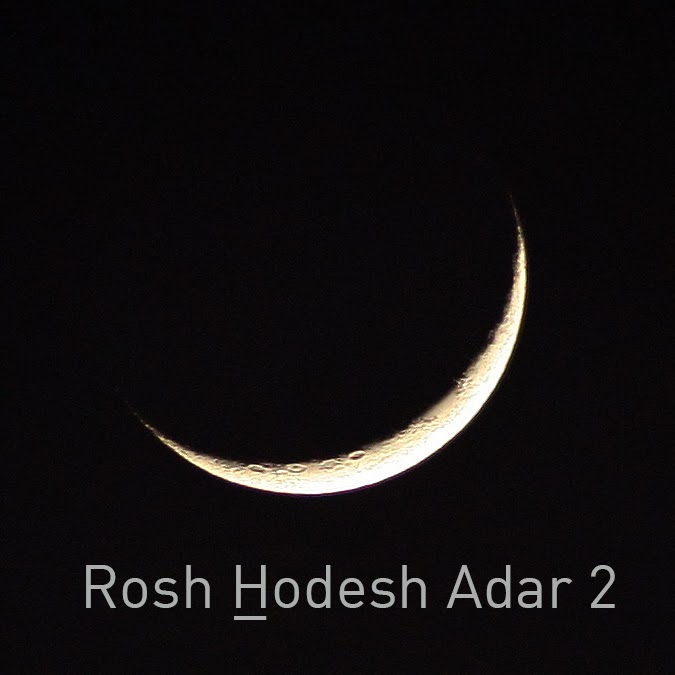 Thursday and friday March 10th and 11th are Rosh Chodesh. What's the new month? Adar. You might be saying to yourself, "Um this month is Adar...what's going on?". Very astute of you. Yes, there are TWO months of Adar this year. While the Gregorian calendar adds an extra day every 4 years to keep the seasons in check, the Jewish calendar adds a whole month every 2-3 years. The mechanics behind it are simple: the Jewish months go according to the moon, which is on a roughly 29 day cycle and there are 355 days in the year. If we only went according to the moon, the dates of the holidays would start slipping back a little each year. This is how the Muslim calendar works, and is why their holidays can fall out in any season. The Gregorian calendar, the one that most of Western society uses, is based on the solar calendar. Every year the first day of summer, fall, winter, spring are the same day. The solar calendar is more stable, but there are slightly more than 365 days in a year, hence the need for the occasional leap day. The Jewish calendar is a mix between the two: generally speaking we use the lunar calendar, but in order that our holidays fall out at the right time of year (Hanukkah, when we celebrate the light in the darkness of winter, would just be weird if it fell in August), we throw in an extra month to readjust to the solar calendar.

Now that we have that straightened out, the next question you may have is, "Why Adar out of all the months?" (or to paraphrase from the famous four questions, "Why is this month different from every other month?"). The most simple explanation is that by adding or not adding Adar, the month that comes before Nisan, we are better able to control Pesach occurring in the spring. The more spiritual answer is because, as we learned last month, Adar is the month of joy. If you have to add in an extra month - why not make it the happiest month of the year? Actually, it's even deeper than that. There is a mathematical concept in Torah that if a drop of something unkosher gets into kosher food, as long as the ratio is 1/60 treif/kosher the treif (unkosher) part gets nullified and the whole thing is fine to eat. Now, the two months of Adar together equal 60 days, so the Lubavitcher Rebbe said that these sixty days in a leap year can lead to the nullification of all the treif or undesirable things in our lives.

Every year when we have just one Adar it's Adar Beit, and on the leap year we add Adar Aleph. It's an interesting quirk that probably has very deep Kabbalistic significance, but it just feels more correct to have Purim the month before Pesach. If Adar Aleph was the standard one and we added Adar Beit, then we'd have 6 weeks in between Purim and Pesach. While it might be a relief for harried mothers to have the extra time to let their family enjoy their shaloach manot before they have to get rid of all the leavened products, it just wouldn't be the same!