The yarzeit of the Rambam 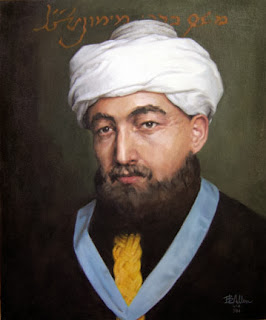 Dusk on December 31, 2015 through sunset on the  January 1 is the yarzeit, anniversary of the death, of Moshe ben Maimon, also known as Maimonides, and most famously known as the Rambam (shorthand for Rabbi Moshe ben Maimon). While any Torah scholar we still talk about today, and care enough to remember and observe the anniversary of their death, was obviously a wise and important person in his or her time, the Rambam is in a class all his own.

Born in Spain in 1135 his family had to flee their home because of religious persecutions against Jews that were becoming more and more common (and eventually culminated in the exile of all Jews from Spain in 1492). His family moved to Morocco, then Israel, before finally settling in Egypt. His brother, David, was a merchant, and went off around 1168 with a large portion of the family's wealth to invest in trade. He tragically died at sea, while sailing to the East Indies. Having lost most of their wealth, the Rambam went to work as a physician. Medicine was something he had been interested in from a young age, but up until this point had spent most of his time engrossed in Torah study, having already wrote his commentary on the Mishnah while his family was in Morocco.

The Rambam excelled at medicine, eventually becoming the personal physician for the ruler of the time, Sultan Saladin. While providing medical care for the royal family, and then acting as a physician in the afternoons for the local population (Jews and non-Jews alike), he still managed to find time to write an enormous amount of literature that is still used by Jews today. The famous number of 613 mitzvot in the Torah comes from the Rambam's codification of Jewish law. He also codified the entire oral portion of the Torah, the Mishneh mentioned above. The Mishneh is still learned today as one of the fundamental parts of any Jewish education.

While considered standard belief for any observant Jew today, his Thirteen Principle of Faith was very controversial at the time. These principles include the ideas that G-d is omnipotent and the writings of the prophets are true. In addition, he also found the time to write the rules for giving tzedakah, charity, to the needy, as well as a diet and lifestyle regiment that is still followed today. His biggest lifestyle advice is to not eat too much, which goes to show human nature doesn't seem to have changed so much in the past 1,000 years.


On top of all this, the Rambam was also a noted philosopher. A google search of him shows him being chronicled by non-Jews all over the world, mostly for his famous Guide for the Perplexed.  It was written to one of his students in 1190, who was having trouble deciding whether to follow the more philosophical aspects of Judaism, or to stick with the more literal translations of the Torah to shape his paradigm in life (a battle still being fought today). Within, he decries the anthropomorphism of G-d and the fact that G-d can only be described by the things He isn't. That is because G-d created everything and therefore everything sprouts forth from Him, you can't begin to say what He is, but rather what He isn't (see - philosophical). This work has been studied by philosophers ever since.

The Rambam's productive life came to an end at the age of 69, a pretty long life for that time. He was temporarily buried in Egypt, and then his remains brought to his final resting place in Tivariya, Israel. There is a beautiful sculpture above his tomb, and a museum for visitors.