Tenth of Tevet: Why fast?

By now, many of us are down off our spiritual high from 8 nights of Hanukkah. The internationally cold, wet, and dreary weather doesn't help this time of year, when the days are still getting shorter and the nights longer. While Av is typically associated with being a month of sadness and misfortune, Tevet actually contains within it much less well known, yet highly detrimental, events to the Jewish people. 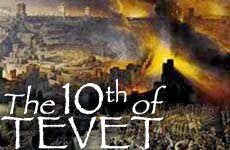 To give you an idea of how many bad things happened there are actually 3 fast days this month, and in a row - the 8th and the 9th are only observed by holy Tzaddikim, and the 10th of Tevet is a public fast day for everyone. The 8th is a recollection of when the Torah was transcribed into Greek. Even though the only other language the Torah is allowed to be written in to be considered kosher is Greek, anyone who has tried to translate special text from one language to another knows that a lot is often lost in translation. This is considered to be the beginning of the intrusion of Western culture on the Torah. The 9th is when Ezra the Scribe and Nechemiya died. They were two prophets who lead the Jews out of exile in Babylon and back to Israel, and once they were gone the people were without true leaders. In addition, the first of the month is also a remembrance of another day that was bad for the Jewish people: King Yechonyah, along with all of the Torah sages and nobles were kicked out of the Yehuda region. The land of Israel had been ruled over by two kings for a while - one in the north and the other in Yehuda. That's not how things were supposed to work, and only the king of Yehuda was the legitimate one. So, when the true king was exiled, and his rule was never reinstated, this was really the beginning of the end of life for the ancient Jews in Israel.

This brings us to the 10th of Tevet. This fast day is different from all of the others, because if any of the other fasts falls on erev Shabbat (Friday) they are moved to either Thursday or Sunday, because really, who wants to go into Shabbat uncomfortable because they are thirsty or hungry. But, for the 10th of Tevet we do. What makes it so different? On this day Nevuchadnetzar began his siege on Jerusalem. For two years Jerusalem fought back, but with an invading army outside of the protective walls, they kept provisions from reaching the people, and many starved to death. Two long years later, Nevudchadnetzar finally prevailed and breached the walls of the city and destroyed the Beit Hamikdash. This ushered in the Babylonian Exile, first of our four exiles.

Indeed, a sad day for the Jewish people, but that's not why we fast. We fast to inspire us to do teshuvah, identify the things we are doing wrong and stop those behaviors. It's easy to take for granted how much of our lives revolve around food, so when we have a day, even just from sunrise to sunset on a short winter's day, without eating, it frees up a lot of time and mind space. Then we can first have the capacity to reflect on our actions and recognize how we need to change. It says in the Gemara that every generation that lives while the Beit Hamikdash has not been rebuilt, it is considered as if they destroyed it themselves. That's a big statement.

The first Beit Hamikdash was destroyed because Jews were worshipping idols and not G-d, not to mention undertaking other unsavory acts, but the second Temple was destroyed because we were not nice to each other. This tenth of Tevet, let's take some time to think about how we can rectify that. If we all try hard enough, maybe this time next year we won't have to fast!