Shemot: What's in a name?

This post is dedicated in memory of Etya Sarah bat Isaac ha-Levi. May it be an aliyah for her neshama

This week's Torah portion is Shemot. Whenever we start a new book (remember there are 5 books in the Torah), the whole book is called by the name of the first chapter. In English, it is called Exodus. It doesn't take a Bible scholar to figure out why: this chapter is dedicated to the Jews' slavery in Egypt, and eventual redemption. Knowing this, we're left with an obvious question: why then is this book called, in Hebrew, Shemot - 'Names'? 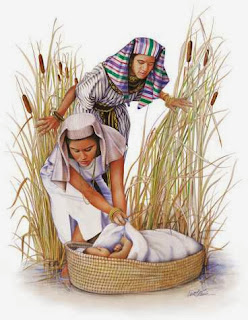 An obvious explanation is that this first sentence is tying together the story from the previous book. Beresheet. The last chapter in the book of Beresheet ends with Jacob blessing to all of his sons before he passes away, and now they are being listed again. It can also be looked at as the last glimpses we had of the Jewish 'Founding Fathers'. From here on in, this is really the story of Moses and the Jewish People. Whereas before the Jewish People were the 12 brothers - their offspring, their parents and grandparents, now, they have grown into something much more. They went from being a small family to a nation - one that will ultimately be upwards of 3 million people by the time they leave Egypt in a few chapters. So in this regard, perhaps the title of Shemot is reminding us where we came from.

Next, we see things quickly going south for the Jews. First, the Torah starts off by saying a new Pharaoh rose up in Egypt, "Who didn't know Joseph". The Jews in Egypt had been treated nicely, very well in fact, because Pharaoh held Joseph in such high regard for saving Egypt from the famine (and indeed helping the nation to increase its wealth at the same time). If you look closely at the Hebrew used to describe the Jewish people, it refers to them as a singular, nameless unit. In English we'd translate it as 'it'. It is much easier to enslave an entire group of people when you dehumanize them by removing any title from them. Without a name, you're hardly even a person, and therefore easier for those in power to subjugate.

Finally, individual Jews are brought into the text. The first names mentioned are Shifrah and Puah, the Jewish midwives who deliver babies even though Pharaoh orders all the boys drowned. A few sentences later vague language is used to describe what is really a momentous event. It reads, "A man went from the house of Levi and took a daughter of Levi and she conceived and gave birth to a son..." The woman knew she couldn't keep the baby because of Pharaoh's decree and placed the baby in a basket which was put into the river. And, as anyone who has seen the Ten Commandments knows, the baby rescued by Pharaoh's daughter was MOses. Interestingly, she's only referred to as 'Pharaoh's daughter' in the Torah.

Let us go back and review this information. First, the baby conceived and put into the river is none other than Moses. What an inglorious ushering into the world! His parents aren't even named in the text - simply referenced by which tribe they were from. And the woman who saves him, Pharaoh's daughter, also isn't named. Pharaoh is an evil guy, and he gets top billing over his righteous daughter. Something isn't right. As it turns out, we do know everyone's names from the oral tradition that corresponds to the written Torah. With this tradition also comes the idea that Shifrah and Puah are actually Moses' mom and sister - Yocheved and Miriam. Also we know Pharaoh's daughter was named Batya.

What idea can we take from the hiding of these names? People's true identity are in their name. The Hebrew word for soul - NeShaMaH has within it the word SheM - name. That is your name is the essence of your soul (or your soul the essence of your name). The midwives were involved in subterfuge, having to work undercover to save the Jewish baby boys. The nature of their hidden work is reflected in the fact that they are using fake names. What about the fact that the greatest prophet in Jewish history's parents aren't even named? This can be seen as showing us that Moses' famous humbleness can be traced back to his family. His parents didn't need fame and exaltation, just knowing they brought forth the man who would lead the Jewish people out of slavery and to become a nation is enough. This can teach us that, while public acknowledgement of something that we did well in does feel nice, at the end of the day the reward for the good act should be the act itself, not the backslapping or handshaking or words of praise we get from others.

A last idea is that it is forbidden to give someone an unflattering nickname. With what we have learned so far, we can see why. Names are powerful - they can be used to hide a person's true intentions, build someone up, or bring them down. The whole book of Shemot is the transformation of the Jewish people from a sad nation, enslaved and terrorized by their captors, to a strong people, who ultimately merit being spoken to by G-d Himself. They go from being 'it' to 'The House of Israel' - a grand title if I ever heard one. So the next time someone asks you 'What's in a name' you can answer more than you even realized!