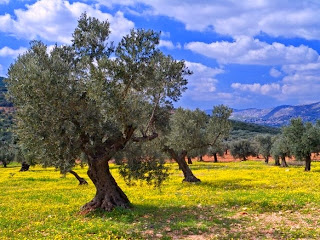 While most of the world is focused on celebrating the change of month (and year) that occurred four weeks ago on  Thursday night (December 31), the significant change in the Jewish calendar happened Sunday night, January 10th instead - the start of the new month of Shevat. We're in the depths of winter, but Shevat isn't about being in the darkness, it's the symbolic turning point - when we can look towards spring. The days are now getting longer, although it feels pretty imperceivable at this point.

Rosh Chodesh Shevat, the first of the month, is special. Not just because all Rosh Chodesh days are mini holidays (when it's a mitzvah just to eat bread and say an extra blessing in the normal after-blessing), but because Rosh Chodesh Shevat is the day that Moshe began his repetition of the rules of the Torah to the Jewish people in the desert, before he died 37 days later on the 7th of Adar. It is for this reason considered to be like a mini-Shavuot (so now you don't have to wait until Sivan for an excuse to eat cheesecake).


The holiday found in this month is Tu B'shevat - the 15th of the month, which is known as the New Year for the trees (stay tuned for more about the holiday coming soon). As mentioned above, Shevat is the month where we start moving out of winter, and that is symbolized by the fact that on the 15th of Shevat the sap starts rising inside the trees.

With all of these diverse ways to view Shevat we can draw a few conclusions. First, even though most of the world still has to suffer through the seemingly coldest part of the winter, and hopefully much more rain here in Israel, being in Shevat reminds us Spring is on the horizon. The rains that will fall heavily across most of the earth (including hopefully in Israel!) are nurturing the vegetation that is beginning to arise. Many plants come out of hibernation based on the lengthening of the days (as opposed to animals that tend to be triggered by changes in the temperature). Even though it may be hard for us to appreciate the extra minutes of sunlight ever day, the trees are noticing and getting to work growing the delicious fruits we'll be enjoying this summer. Appreciate the cold and wet while you can - before you know it, it will be time for Pesach cleaning!