Hanukkah: An Under Appreciated Holiday 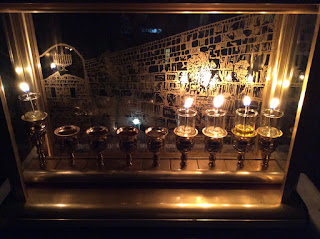 Hanukkah can't catch a break. Usually, in the US at least, it gets lumped together with Xmas for the 'Holiday Season' and is often thought of as 'The Jewish Xmas' replete with gift giving (which was never part of the Hanukkah tradition until more recent times).  There is so much more to Hanukkah than pumpkin spiced sufganiyot (donuts) or dreidels.

The Gemara states that Hanukkah was cannonized because of the miracle of the lights lasting for 8 days. There are numerous instances in Jewish history of a rag-tag bunch of Jews overcoming statistically impossible odds to squeak out a victory over our would-be oppressors (The Six Day War just being the most recent example).  But, as Rabbi Lawrence Kelleman points out, if we look at the only mention of Hanukkah in the Siddur, the prayer of Al HaNissim, talks about how miraculous the military victory was, and not the oil part. Why this discord?

Some context is in order. For those of you who remember High School social studies, the Greek Empire was known for it's advances in math, science, medicine, philosophy, and art. Hippocrates, Plato, Homer, - their works are still considered relevant and being studied today. The Greeks invented the gym, theaters, among many other things. It's not hard to see why it would be appealing for the Jews living in Eretz Yisrael under the Greek exile to be enticed to join the society. While many Jews became 'Hellinized Jew' (in today's parlance, secular), it is well known that a few Jews didn't. They moved out of the city in order to practice their observance with less distraction, and so our story begins.

The battle of Hanukkah arguably began when Greek soldiers arrived at the small town of Modi'in (located like modern Modi'in is north and west of Jerusalem), and demanded that the local leader, Mattityahu, sacrifice a pig to the Greek god Zeus. Unsurprisingly, Mattiyahu said no, but a local Hellinized Jew offered to do it instead of him. I've read different accounts as to the motivation of that person, but at the end of the day, it doesn't matter. If the leader and respected elder of the town was taking a stand, and risking his life, he wasn't about to let any other Jew move further away from the Torah and closer to Greek culture instead of him. Mattityahu killed him then and there, and the surrounding townspeople took up arms against their Greek oppressors.

The war went on, past Mattityahu's death a year later, and his son Yehuda was ultimately the one who lead the Jews to victory and back into the Beit Hamikdash. There are many parts to what happened next that are considered to be miraculous in their own right: the fact that the Greeks had missed one jug of sealed oil, while they were busy defiling the others so they couldn't be used for the Temple service, the fact that the oil was only supposed to last one day but burned for 8 - the exact amount of time it would take to produce new oil to continue lighting the Menorah. But an aspect that is often overlooked, is the fact that Yehuda took the step of lighting the Menorah, knowing he didn't have enough oil. According to Jewish law, this isn't something that is allowed - the Menorah has to burn continuously. They weren't obligated to light the Menorah at that time, they could have waited 8 days until they had a reliable supply of oil. But they didn't. After being oppressed in their religious observance for so long, the Maccabees couldn't wait to return to their service of G-d in the Beit Hamikdash. They were Kohanim (priests) after all, this was their profession. The fact that they were so excited to return to being Jewish and act it out freely, this is perhaps what the Gemara was referring to in the miracle of the oil - that even after being exposed to the test of an intoxicating secular culture, at the end of the day, the Jews wanted nothing more than to return to their rightful place in this world.

Perhaps now we can see why this story is still so important to us today. We live in a world bursting with temptations and distractions from our religious observance, and seemingly logical scientific rationales that can explain away the need for kashrut (kosher) or taharat mishpacha (family purity) laws, or anything really. These challenges aren't new. But if we can remember that our ancestors 2,000 years ago knew it was important enough to fight for, to not assimilate, and that this holiday is placed where it is in the calendar as a reminder, we can do our best to carry on our tradition. And enjoy some latkes and donuts in the meantime.