Not Just Another Sporting Event

Ordinarily, sport events don’t spark my interest. I’ve never been a fan of watching sports and I used to think that spectator sports were a complete waste of time. So when I was asked to write an article about Maccabiah, I thought, “Shoot, I have nothing to write about.” But the more I read about it, the more I realized that it is no ordinary sporting event. In fact it represents the epitome of what draws people to sporting events in the first place.

I grew up in Seattle during the hay day of the Mariners and the Supersonics, but the only reason I knew anything about sports was because of my older brother and sister. My sister, especially, was so obsessed with sports that when she was 12 my parents bought her a basketball hoop as a bat mitzvah present. But when Seattle lost the Supersonics, I felt sad along with everyone else. I realized that people weren’t sad because they lost a team of sweaty men chasing a ball, but because a sports team connects them to something greater than themselves and also connects them to everyone else in the city. A sports team brings a sense of identity, meaning and unity to a city.

Maccabiah is celebrating its 80th Anniversary and the boy who started it, and the people who made it happen, clearly understood the power of a sporting event. Yosef Yekutiel, a 15 year old, Russian born, Jew was inspired by the Olympics in 1912 and spent 10 years developing his fantasy of a Jewish Olympics in Palestine. In this incredible article detailing the history of Maccabiah it describes how, in an age lacking internet and television, two groups of bikers literally rode around the world to tell people about the games. 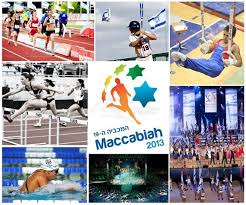 Well they did a good job, because it’s still going strong and Adam Formal, who grew up in New Jersey, has participated in the Maccabiah in 2006 and 2009 as a table tennis athlete. He recalls, “Meeting so many Jews from all around the world and the feeling of solidarity and the power of the opening ceremony in front of 60,000 people,” as part of what made his Maccabiah experience so special.

Formal grew up in a traditional home, with a strong sense of connection to Israel and Jewish culture, as his grandfather had moved to Israel after WWII and fought in the war of independence and his father and uncle were born in Israel. But coming to Israel for Maccabiah made that connection stronger. He recalls, “One night going out to club Clara in Tel Aviv in 2009. It just so happened that the Israeli National team for tennis was there celebrating after a huge upset victory against Russia in the Davis Cup. They welcomed us and we all spent a good portion of the evening there together celebrating, talking, and I just remember feeling part of something special.” They were strangers, but they were family and, whereas in any other context they may not have spoken, with sports in common they celebrated and connected with each other.

This is the power of Maccabiah. The people that started Maccabiah were visionaries and builders. They were determined to build Israel and bring back strength and prowess to the Jewish people. Today it has become an incredible way for young Jews to reconnect with their heritage, their land and each other.

Jeffrey Devers, 34, also felt the power of participating in Maccabiah. An Australian born basketball player, Devers, grew up with little connection to Judaism. He joined the Maccabi Warriors basketball team in Melbourne two seasons ago and has since learned more and developed a much stronger connection to Judaism. The turning point was when the team went to the Kotel (Western Wall) and Devers was taken by surprised when a Rabbi at the Kotel gave him a bar mitzvah and a Hebrew name, Yochanan. Devres had not had a bar mitzva when he was younger and was grateful for the experience. “As one of the experienced players on the team, roles were reversed and I was out of my comfort zone which was refreshing and nice, and it connects you closer to your teammates,” Devers said.

Formal, too, describes a priceless moment from his Maccabiah trip. “I was fortunate enough to take a little time off from my touring to meet with my family in Ramat Gan. I was brought to the house not knowing what to expect, as I had not met most of them. I was warmly greeted by 31 family members all who wanted to talk to me and share the day with me. In America I have an extremely small family and this overwhelming feeling of belonging overtook me and I could not help but cry tears of happiness from feeling that I was in the right place.”

With young Jews like Formal and Devers being deeply impacted by Maccabiah, this is clearly not just another sporting event.

Maccabiah begins tomorrow, July 18th and this year around 9,000 Jewish athletes from 79 countries will take part in the 19th quadrennial Maccabiah Games, quite a leap from the 390 athletes from 18 countries that were at the very first Maccabiah in 1932 in Tel Aviv.

I, for one, am incredibly inspired.

Yosef Yekutiel can be proud.