The Ninth (Tisha in Hebrew) of Av is the day that both of the Temples in Jerusalem were destroyed. Most of the focus is put on the destruction of the second Temple, since our Sages say that every generation that doesn't live in a time when this Temple was rebuilt, is considered to be guilty of destroying it themselves. As we've discussed before, the behavior that allowed for the destruction of the Temple was sinat chinam - hating each other for no real reason. If we were able to just judge each other favorably, all the suffering we are causing ourselves would be over.

So why is it that we mourn for the loss of the Temple, and by extension our behavior that brought us to this place, through fasting? If it's hard to be nice to your fellow Jew cutting you in line or talking too loud on their cell phone when you're well fed and hydrated, how is being thirsty and cranky supposed to bring us to a place where we can truly repent for our actions to the extent we don't make these mistakes anymore? I have one idea why.

A few weeks ago, I decided to go on a juice diet for a few days. Without having to plan meals, or spend time eating, I found myself with a lot more time on my hands. It's something we take for granted, but think about it - if you cut eating out of your daily grind of work, social life, gym, commuting, etc. you will free up hours every day. Let's be honest, especially when it comes to Jews, so much of our life revolves around food. Once you remove food, a new space in your life is created. It's not like on Yom Kippur, where we are in shul all day and not allowed to watch TV or listen to the radio. On Tisha B'Av you could easily spend the day fasting and tuned in to a Law and Order: SVU marathon. There are other things that we do, to ensure that the day isn't like any other - not sitting in chairs until afternoon, not wearing leather, or showering. These actions are the gentle reminders that this extra time we've been given should be spent thinking about the purpose of the day. Most of these things we also refrain from on Yom Kippur.

So why is it that we have all of the physical acts of restrain on Tisha B'Av without the the framework we do on Yom Kippur to pray for forgiveness. It's almost hard not to be moved on Yom Kippur, praying with your community and reciting deeply meaningful words. While there are kinnot, poems, that we read on the day of Tisha B'Av, they are much more esoteric and therefore not necessarily as moving. This is I think the secret to Tisha B'Av and ending sinat chinam - it's that little effort that we have to put in that will make all the difference. 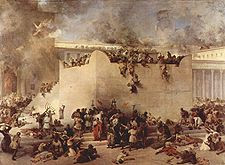 The first step we take to break any bad habit is always the hardest. Once we get the ball rolling, it moves much easier. It's that first step though. It's the effort it takes, when you are hungry and tired and can't stop thinking about what you'll eat to break the fast, to instead use that time to think about what you can do to improve yourself and your interactions with your fellow man. That's huge, and it will be easier to act on those altruistic impulses the next time a situation presents itself.

If every one of us were to utilize the opportunity presented to us on Tisha B'Av, to think about how our actions affect others and not just about ourselves, it will be much easier on the 10th of Av or the 15th of Elul or twentieth of Sivan to make the same positive decisions. Who knows, if we put a little effort into it, maybe we won't need to fast on the ninth of Av next year.