Yes, You Can! The Power Within 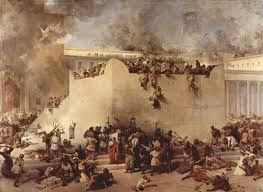 Imagine being alive during the first temple period. There are prophets and open miracles every day. You can actually experience God instead of just believing in Him. Imagine the devastation of the destruction of the temple and all that was possible through it. Of feeling like someone turned off the light and you are blindfolded and wonder if you will ever experience God like that again.

Now imagine being alive during the Second Temple period. In the beginning there are two great leaders, Ezra and Nechemia, trying to bring Jews back together and restore God’s presence in the Temple. As the Second Temple period continues, Herod renovates and rebuilds the Temple into the most glorious building you have seen but the leadership becomes corrupt; Kohanim (priests) buy their way into the Temple and everyone is feeling confused and disillusioned. Imagine thinking, at least we have the physical temple, we still have a connection to God. Imagine then, that too is burned down, destroyed and taken away from you. You feel completely lost and can’t imagine how you will ever reconnect to God and how the Jewish people will survive.

Now think about where you are now. It is the year 2016 and we still don’t have the Third Temple, but we are alive and Jews everywhere are connecting to Torah, to God and to each other. More importantly we have one day every year that we keep coming back to. A day that we have mourned ever since the day that the walls in Jerusalem were breached; the 17th of Tammuz.

Every year, we come back to it. Every year, we mourn the beginning of what became the end of our holy temple. But we don’t have to come back to it every year. We can change this, here and now. There is hope because even though we don’t have the physical temple, God is still close and we can rebuild the connection simply by tapping into the Godliness that exists within each of us and thereby changing our thoughts and actions.

The temple had been the place for God’s revelation to come forth in the world. But when even the Kohanim became corrupt there was no one to facilitate that revelation through the temple. Many people disassociated themselves from the temple and the Kohanim because they knew it was wrong but didn’t know what they could do about it. What they didn’t realize was that they had the power within themselves. Every single person does. God is one, the Torah is one and we are all connected to and part of that same oneness because we are a manifestation of God.

When we forget that we are part of that oneness, we forget our inner power and get confused.

The B'nai Yisaschar asserts that the month of Tamuz represents the power of sight. It was during this month that the spies went to go check out the land of Canaan. God had told us that we would conquer the land. But the spies came back with the report that there was no way for us to conquer the land. They became disconnected from their oneness to the extent that they didn’t listen to God’s promise and let other thoughts distract them and ultimately, misled them.

When we lost the temple, we lost the revealed connection with God. But God didn’t leave us. We disconnected, not God. Rabbi Yehudah Prero discusses God’s unwavering love as is discussed in the Gemora (Yoma 54b), that when our enemies entered the Sanctuary of the Temple, they found that the k'ruvim (cherubs), which were on top of the Holy Ark, were embracing. Usually, the k’ruvim would turn away from each other when we weren’t following God. But God was showing that even though the Temple was destroyed, His love for us had not changed.

We don’t have to come back to this day in mourning again and again. Although the Temple was destroyed, God’s love has been constant and unwavering. He always wants to be connected with us.

Each of us have within ourselves the power to reconnect. To send away any thoughts that lead us away from our inherent connection to God. When we reconnect to God, we can bring his revelation back into the world and merit the final redemption. One thought at a time. One action at a time. So next year, we can come to the 17th of Tammuz and finally rejoice again.