Recently, one of my friends called me to vent. She had just come back from another date with another guy that she couldn't wait to be over. "I don't know what I'm doing wrong! Why does this have to be so impossible?!" 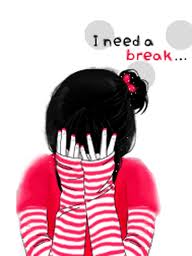 I gently suggested she take a break from dating for a little while. "I'm 28!" she scoffed, "I don't have time to wait!" We've already talked about not dating while figuring out what you want in life, but sometimes we just need a break - a vacation from what we think we should be doing, in order to maintain our energy (and sometimes sanity).

While advice is easier to give than receive, I did know where she was coming from. A few months ago, my Rabbi overheard me recounting a particularly heinous bad date to a friend. "Why not take a break from guys, and focus on yourself until Chanukah [3 weeks later]?" he suggested. I've never second-guessed any advice he has given me, but this - I couldn't understand how he could even suggest such a thing. I can't go to a family's house for Shabbat without one of their little kids asking me why I'm not married yet, and here he wants me to stop trying?

I finally realized that spending a few weeks not going on bad dates probably couldn't hurt. I found I had more time to exercise, and read, and generally do things that I wanted to. My friends were disappointed that I didn't have any funny dating stories for them, but they quickly got over it. After Chanukah came and went, I realized that, as we say in Israel, this hafsaka (break), was definitely worth my time. Once I started going out again I was more patient and willing to give guys a chance, where as when I was more exasperated with the dating process I would have been quick to say, "This won't work - next!"

Look at how we deal with stress or bordom in other parts of our lives: what do we do when we get stressed out at work? Take a long weekend to get away. I've never been into sports (unless you count shopping at Centrury 21 in New York City) but my friends who play competitively have told me that when they start dreading going to practice, they know it's time to pull back a little. Once they took some time off, they were excited to go back and even performed better.

So, if you find yourself getting bored, or like my friend despondent, take a break! Two weeks, a month, whatever. You aren't wasting your time. If anything, you are saving time, because no one wants a second date with someone desperate or anxious to get married.

Email ThisBlogThis!Share to TwitterShare to FacebookShare to Pinterest
Labels: EmunaDating, Gimme a Break