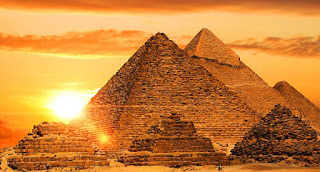 This week's Torah portion, Shemot, starts a new book in the five books that make up the Torah (The Bible). The portion begins by stating that all 70 people that had come with Jacob to live in Egypt had died and that, "A new king arose over Egypt, who did not know of Joseph."(Shemot 1:8)

Is it really possible that anyone - let alone the King of Egypt - could be unaware of all that Joseph had done for the country? A few parshot ago he gave the previous Paraoh lifesaving advice that helped Egypt become wealthy during a horrible famine. You would think that he would be a national hero long after he and his relatives passed away!
Joseph wasn't forgotten in the sense that no one "remembered" him. Rather, the significance of his life-saving contributions had simply faded from everyone's memory. As soon as the nation recovered from the famine and life returned to normal, it was easy for them to relinquish their gratitude toward Joseph, (and with it the safety of his relatives, the Jewish people, living in Egypt). After an entire generation passed away, the people in Egypt simply did not know of Joseph.
Unfortunately, this sort of thing still happens all the time today. Most of us can think of someone who helped us through a difficult situation. We were so grateful, and were sure to express our thanks often. Once the dust settled, we find ourselves busy and not able to check in as much as we did when we needed their help - if we continue to check in at all.

Remember - it's never too late to drop them a line with a reminder of how you are still appreciative of your relationship and what they did for you. The true measure of a person is not demonstrated by the gratitude you show a person after they've helped you. Rather, it is demonstrated by the heartfelt gratitude you can still show long after the fact. True gratitude is not defined by a person who doesn't forget; it's defined by the one who always remembers. Make the call today.
With content from Aish.com