In this week’s Torah portion, Vayeshev, we get a peak into realm of sibling rivalry. The first few sentences sound like they are talking about a familiar familial complaint: Joseph would tattle on his older brothers to their father Jacob (37:2), and Joseph was Jacob’s favorite, which he showed by making him that famously colorful coat (37:3). To further complicate matters, Rashi, the 11th century Torah commentator, tells us that the brothers weren’t even doing all the bad stuff Joseph said they were - he was misinterpreting their actions. This doesn’t sound like the family interaction we’d expect from the founders of the 12 tribes of Israel! 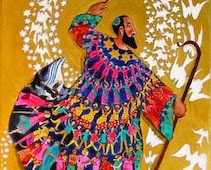 In spite of all this, Joseph is still one of the few people in Jewish history who were given the title "HaTzadik" (the righteous one). How could the brothers view one of their own flesh and blood, who was in fact righteous, hate him enough so as to want to try and kill him?

The following are the words of Rav Eliyahu Meir Bloch (1894-1955), the Telshe Rosh Yeshiva, zt"l: The Torah teaches us that the first seed of the mistake of the brothers flowed from a very natural human trait. In spite of the fact that these human beings reached great heights and purity of spirit, nevertheless their human traits were submerged deep inside their consciousness to the extent that they did not realize that they were there. They thought they were making a perfectly impartial judgment.

We thus see that even an iota of jealousy, in even a great person, can impact his ability to think clearly. This, says Reb Eliya Meir Bloch, was the downfall of the brothers. This was not gross and coarse sibling rivalry, but a miniscule amount of jealousy. Sometimes that is all that it takes to color a perception and to color a decision to the extent that they could feel that Joseph was out to get them and as such they could feel justified in condemning him to death. Even the greatest of human beings - the founders of the 12 Tribes of Israel - are unfortunately prone to the pitfalls and foibles of all mankind.

The practical lesson for us is clear. We may believe that we are thinking something through and we may believe that we are acting purely with the best intentions and for the Sake of G-d. But we as human beings must always question our motives: Are they pure? Are my intentions proper? Did I make a mistake? Did my personal involvement color my decision? It can happen to anyone. We are subject to feelings of jealousy, of questing for honor, and of the whole range of human emotions and character traits.